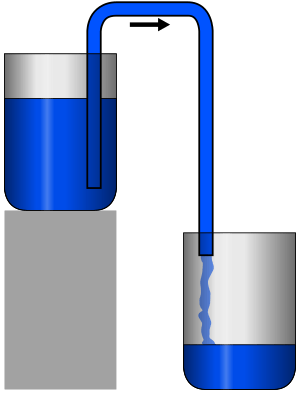 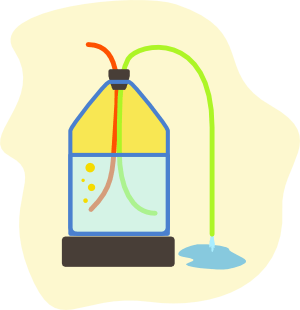 The marot jar is a special kind of syphon.

The word syphon (Greek: Σίφων, also spelled siphon) can refer to any device that conducts the flow of liquids through tubes. Used in the right way, the word refers to a tube in an upside-down U shape. The tube makes liquid flow up hill. It flows higher than the source of the liquid, to come out at a level lower than the surface of the source. The movement is done without pumps. It is powered by the fall of the liquid as it flows down the tube under the pull of gravity.

The syphon must touch the liquid in the (upper) reservoir (the source, where the liquid comes from) in order for it to work. This allows atmospheric pressure to push the liquid up the tube. The top of the tube is where the lowest pressure is, so the liquid will move towards that area in the same way as a barometer. The top of a syphon is the same as the height of a barometer, because they work in the same way. The lower pressure is caused by the liquid falling on the downhill side. A syphon can raise water to a height of 25 feet above the source elevation. New discoveries in Syphon Pump Metering allows for dispensing liquid above the source. United States Patent #5,358,000 was the first to teach this method. A siphon can be used for irrigation purposes. When both ends of a syphon are at atmospheric pressure (equal pressure), liquid flows from high to low. However, if the lower end is pressurised, liquid can flow from low to high. Most syphons have water as a fluid. Other fluids, such as mercury, or organic liquids or even gasses like carbon dioxide can also be syphoned.

All content from Kiddle encyclopedia articles (including the article images and facts) can be freely used under Attribution-ShareAlike license, unless stated otherwise. Cite this article:
Syphon Facts for Kids. Kiddle Encyclopedia.