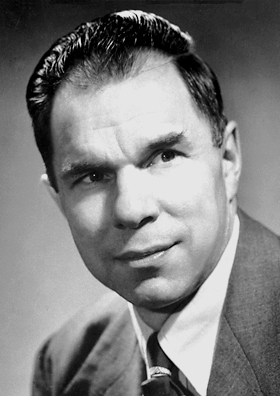 In 1980, he changed several thousand atoms of bismuth into gold at the Lawrence Berkeley Laboratory. His experimental technique, using nuclear physics, was able to remove protons and neutrons from the bismuth atom. Seaborg's techique would have cost too much money to make of gold, but his work is the closest to the mythical Philosopher's Stone.

Seaborg worked at the Manhattan Project during World War II. He studied the chemical properties of plutonium as a part of the secret war research.

He served as Chairman of the Atomic Energy Commission and was a professor at the University of California, Berkeley.

Seaborg was the principal or co-discoverer of ten elements: plutonium, americium, curium, berkelium, californium, einsteinium, fermium, mendelevium, nobelium and element 106, which was named seaborgium in his honor while he was still living. He also developed more than 100 atomic isotopes. Early in his career, Seaborg was a pioneer in nuclear medicine and developed many isotopes of elements that helped to diagnose and treat diseases. For example, he studied iodine-131, which is used in the treatment of thyroid disease. He developed the actinide concept which placed the actinide series beneath the lanthanide series on the periodic table. Seaborg also proposed the placement of super-heavy elements in the transactinide and superactinide series.

All content from Kiddle encyclopedia articles (including the article images and facts) can be freely used under Attribution-ShareAlike license, unless stated otherwise. Cite this article:
Glenn Seaborg Facts for Kids. Kiddle Encyclopedia.