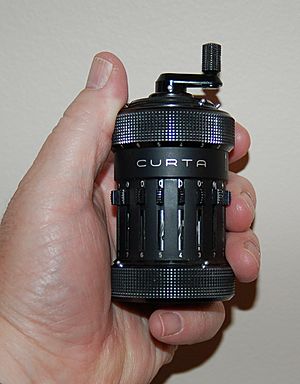 Curta Type I calculator shown in the operational position: held by the left hand, with the crank to be turned by the right hand

The Curta is a small mechanical calculator developed by Curt Herzstark. The Curta's design is a descendant of Gottfried Leibniz's Stepped Reckoner and Charles Thomas' Arithmometer, accumulating values on cogs, which are added or complemented by a stepped drum mechanism. It has an extremely compact design: a small cylinder that fits in the palm of the hand.

Curtas were considered the best portable calculators available until they were displaced by electronic calculators in the 1970s. The Curta, however, lives on, being a highly popular collectible, with thousands of machines working just as smoothly as they did at the time of their manufacture 40, 50 or 60 years previous.

In 2016 a Curta was designed that could be produced on a 3D printer . The fine tolerances needed are beyond present printer technology and this means the machine has to be much bigger, about the size of a coffee mug.

The Curta Type I was sold for $125 in the later years of production, and the Type II was sold for $175. While only 3% of Curtas were returned to the factory for warranty repair, a small, but significant number of buyers returned their Curtas in pieces, having attempted to disassemble them. Reassembling the machine was more difficult, requiring intimate knowledge of the orientation of, and installation order for, each part and sub-assembly, plus special guides designed to hold the pieces in place during assembly. Also, many identical looking parts, each with slightly different dimensions, required test fitting and selection as well as special tools to adjust tolerances.

The machines currently have a high curiosity value and sell for around US$1,000, but going as high as US$1,900 for models in a pristine condition with notable numbers.

Numbers are entered using slides (one slide per digit) on the side of the device. The revolution counter and result counter appear on the top. A single turn of the crank adds the input number to the result counter, at any position, and increments the revolution counter accordingly. Pulling the crank upwards slightly before turning performs a subtraction instead of an addition. Multiplication, division, and other functions require a series of crank and carriage-shifting operations.

The Curta was affectionately known as the "pepper grinder" or "peppermill" due to its shape and means of operation. It was also termed the "math grenade" due to its superficial resemblance to a certain type of hand grenade.

The Type I Curta has eight digits for data entry (known as "setting sliders"), a six-digit revolution counter, and an eleven-digit result counter. According to the advertising literature, it weighs only 8 ounces (230 g). Serial number 70154, produced in 1969, weighs 245 grams (8.6 oz).

The larger Type II Curta, introduced in 1954, has eleven digits for data entry, an eight-digit revolution counter, and a fifteen-digit result counter. It weighs 13.15 ounces (373 g), based on weighing serial number 550973, produced in early 1966.

The Curta was popular among contestants in sports car rallies during the 1960s, 1970s and into the 1980s. Even after the introduction of the electronic calculator for other purposes, they were used in time-speed-distance (TSD) rallies to aid in computation of times to checkpoints, distances off-course and so on, since the early electronic calculators did not fare well with the bounces and jolts of rally racing.

Contestants who used such calculators were often called "Curta-crankers" by those who were limited to paper and pencil, or who used computers linked to the car's wheels.

The Curta was also favored by both commercial and general-aviation pilots, before the advent of electronic calculators, because of both its precision and the user's ability to confirm the accuracy of his or her manipulations via the revolution counter. Because calculations such as weight and balance are critical for safe flight, precise results free of pilot error are essential.

All content from Kiddle encyclopedia articles (including the article images and facts) can be freely used under Attribution-ShareAlike license, unless stated otherwise. Cite this article:
Curta calculator Facts for Kids. Kiddle Encyclopedia.