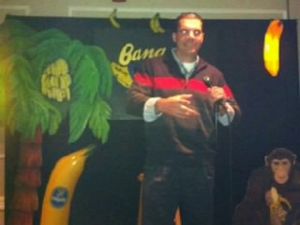 Jimmy Fallon first stepped on a comedy stage at Bananas. His mother had told him about an impression contest, so Fallon came up with a routine about a commercial for troll dolls. He ended up winning the contest and after college he began touring the country.

Chris Rush recorded his album There's No Bones in Ice Cream at the Poughkeepsie location.

All content from Kiddle encyclopedia articles (including the article images and facts) can be freely used under Attribution-ShareAlike license, unless stated otherwise. Cite this article:
Bananas Comedy Club Facts for Kids. Kiddle Encyclopedia.