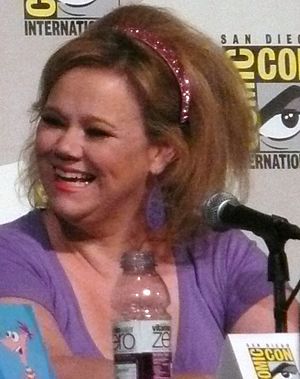 Caroline Gilchrist Rhea is a Canadian actress and stand-up comedian. She was the original host for the NBC reality show The Biggest Loser until Alison Sweeney took her place. Rhea also starred as Hilda Spellman for the situation comedy Sabrina, the Teenage Witch and replaced Rosie O'Donnell as the hostess for her syndicated talk show (which was renamed the Caroline Rhea Show). She was born April 13, 1964 in Montreal, Quebec.

All content from Kiddle encyclopedia articles (including the article images and facts) can be freely used under Attribution-ShareAlike license, unless stated otherwise. Cite this article:
Caroline Rhea Facts for Kids. Kiddle Encyclopedia.