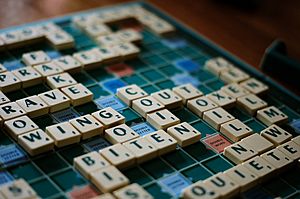 A game of English-language Scrabble in progress 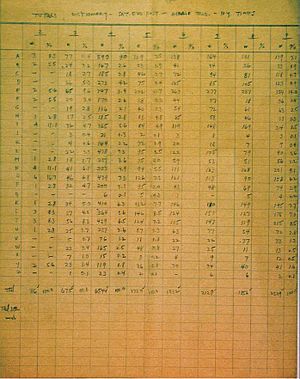 Alfred Butts manually tabulated the frequency of letters in words of various length, using examples in a dictionary, the Saturday Evening Post, the New York Herald Tribune, and The New York Times. This was used to determine the number and scores of tiles in the game. 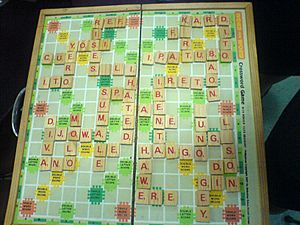 A game of Scrabble in Tagalog 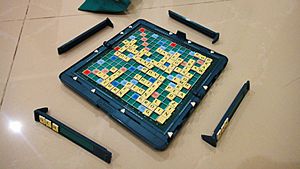 Scrabble is a game that is played by 2, 3 or 4 people. It uses a board with squares on it (15x15) and a large number of letters on small tiles. Each player, when it is his/her turn, has to put a word on the board, using any of the seven letters (seven tiles) that they have in front of them. Their word must join on to what is already on the board.

The players decide who is going to start by taking one letter (one tile) from the bag. The person with the letter closest to the beginning of the alphabet may start.

Each player takes seven tiles from the bag (without looking at what they are). The player puts these tiles on a rack in front of him so that he can see them, but the others cannot see which letters he has. After each turn a player can take some new letters out of the bag so that he has seven letters again for his next turn.

The first player puts a word on the board using some, or all, of his seven letters as possible. He must include the square in the middle. It is then the next player's turn. His word must join on somewhere to what the other player has already put. Sometimes it is possible to make two or more words in one turn by touching other letters, but each word on the board reading horizontally (left to right) or vertically (top to bottom) must be a proper word (no names) but abbreviations (shortened forms) are allowed.

Each tile (each letter) has a number of points. The common letters such as A, B, T, etc. are worth one point. Unusual letters such as Q and Z are worth 10 points. There are also two blank tiles which can be used for any letter. A player must say what the letter is when he puts it down, e.g. he might say that "C" "A" "Blank" spells "CAT". During the rest of the game that blank tile must be treated as a letter "T".

There are special Scrabble dictionaries available in which all allowable words are listed. When playing according to the proper rules one is not allowed to use a dictionary to find a word. However, if one of players challenges another (i.e. if he says: "The word you have put down is not allowed"), then the players may check it in the dictionary. If the word does not exist, the player must take his letters back and he loses his turn.

After a while there are no more letters in the bag. The game finishes when one player has no more letters. The other players have to count the points for the letters they still have in front of them, and take them away from their total score.

Scrabble is available in many languages. Even if a language uses the same letters as English, some of the common English letters may be unusual in another language, and common letters there may be unusual in English. There are versions in languages with other alphabets, such as Russian.

Scrabble was invented in 1938 by an architect named Alfred Mosher Butts. He had previously invented a similar game called Lexiko. He worked out how many points should be given for each letter by looking at books and newspapers and counting how often particular letters are used in the English language. He called the game "Criss-Crosswords". However, he was not successful in selling the game. In 1948 a lawyer called James Brunot bought the rights to make to game. Brunot made some of the rules easier, and changed the name to "Scrabble", which is a real word meaning: “to scratch around frantically”. Soon other firms around the world were buying rights to make the game. It had become so popular by 1984 that it was made into a daytime TV show on NBC television.

The name Scrabble today is a trademark of Hasbro, Inc. in the US and Canada and of J. W. Spear & Sons PLC in other countries.

All over the world people play Scrabble in clubs and tournaments. People who play in serious tournaments are given a time limit. They lose points if they spend too long thinking about their moves.

There are websites where one can play Scrabble online.

On Facebook, there is a version of Scrabble called Scrabulous.

All content from Kiddle encyclopedia articles (including the article images and facts) can be freely used under Attribution-ShareAlike license, unless stated otherwise. Cite this article:
Scrabble Facts for Kids. Kiddle Encyclopedia.