The Bardavon 1869 Opera House in the downtown district of Poughkeepsie, New York, United States, is the oldest continuously operating theater in New York State. Designed by J.A. Wood, it was built in 1869 and served as a venue for various performing arts, community meetings, and celebrations until 1923; it largely resumed this heritage by becoming a general performing-arts facility in 1976. In the interlude period from 1923 to 1975, it served as a cinema, although there were some live performances, especially vaudeville, during this period. Originally called the Collingwood Opera House after its owner and operator James Collingwood, the theater featured an unusual two-stage dome. Between 1869 and 1921, many notable figures of the day graced the Bardavon's stage, including Sarah Bernhardt and John Barrymore.

The Bardavon was designed by prominent Poughkeepsie architect J. A. Wood and built by James S. Post, the latter notable for designing or erecting architectural structures in the Poughkeepsie central business district and Vassar College. An extensive renovation was undertaken in 1905 and supervised by architect William Beardsley, who also designed the Dutchess County Court House and Attica state prison. The theater was not reopened until January 1, 1923, when it was opened under the new name The Bardavon Theater.

At that time, it was bought by Paramount, and in 1928 a Wurlitzer theatre pipe organ was added. This organ was removed in the mid '60's and installed in a private residence in Scarsdale, NY until subsequent dismantling by a private collector, and placed in storage. It is most likely the theater where cult film director Edward D. Wood, Jr. served as an usher in his youth, although sources don't often specify the Bardavon by name. In 1947, the theater was further modernized and a movie marquee added. The style of the interior after the renovation has been described as neo-classic. 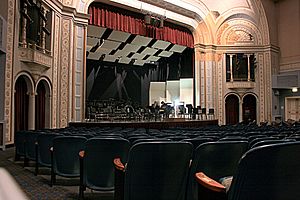 View of the stage

The venue continued as a cinema up until 1975, when massive redevelopment of the downtown area threatened it with demolition. Sitting where it does, it was near-adjacent to the site of the new Civic Center and a proposed arterial highway project. There were plans to raze the building and use the site for a parking lot. Concerned citizens banded together to save the theater and were successful in getting it named to the National Register of Historic Places on August 20, 1977 — and renamed The Bardavon 1869 Opera House. Since then, over $5 million has been raised and used to partially renovate the Bardavon, which is now in use again as a venue for a broad range of performing arts including theater, dance, music, opera, and other genres. The original Wurlitzer pipe organ was discovered in 1983 by the New York Theatre Organ Society, www.nytos.org, and a deal was struck for the renovation and re-installation of the instrument with NYTOS as permanent curator holding ownership of the instrument.

The Bardavon has been the home of the Hudson Valley Philharmonic for over 40 years. In one notable 1953 performance, former First Lady Eleanor Roosevelt provided the narration for Prokofiev's Peter and the Wolf'.

Actors and musicians who have performed at the Bardavon and UPAC

All content from Kiddle encyclopedia articles (including the article images and facts) can be freely used under Attribution-ShareAlike license, unless stated otherwise. Cite this article:
Bardavon 1869 Opera House Facts for Kids. Kiddle Encyclopedia.