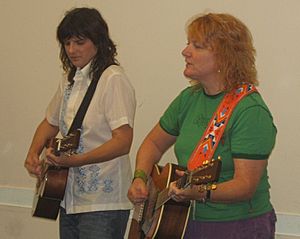 Ray has put out five solo albums. They are called Stag, Prom, Live from Knoxville, Didn't It Feel Kinder and "Amy Ray: Live MVP". She has toured with both The Butchies and her band The Volunteers.

Saliers is also planning a solo album. She is co-owner of Watershed Restaurant in Decatur, Georgia. Saliers was an initial investor in the Flying Biscuit Cafe in Atlanta, Georgia. In 2005, Saliers and her father, Don Saliers, a theology professor at Candler School of Theology at Emory University, released the book A Song to Sing, a Life to Live: Reflections on Music as Spiritual Practice. They promoted the release of the book together including several days of speaking and performing together at the Washington National Cathedral College in Washington D.C.

All content from Kiddle encyclopedia articles (including the article images and facts) can be freely used under Attribution-ShareAlike license, unless stated otherwise. Cite this article:
Indigo Girls Facts for Kids. Kiddle Encyclopedia.