Kids Encyclopedia Facts
(Redirected from Gardiner (town), New York)
This page is about the town. For the hamlet, see Gardiner (CDP), New York.

The Town of Gardiner is in the south-central part of the county. 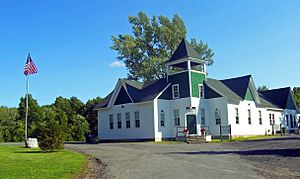 The town hall, a former schoolhouse on the National Register of Historic Places.

The first settlers in the region were Huguenots from France. Gardiner was created from parts of New Paltz, Rochester, and Shawangunk by an act of the New York State Legislature on April 2, 1853. The first town meeting was on May 17, 1853. It was named for Lieutenant Governor Addison Gardiner. In 1925, a large fire destroyed a large part of Gardiner village. 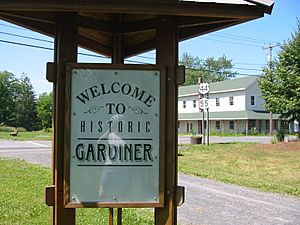 The Wallkill Valley Rail Trail begins in southern Gardiner and runs along the abandoned Wallkill Valley Railroad rail corridor to New Paltz, New York. Majestic Park is off of Farmer's Turnpike, and features a skate park, playground, gazebo, and covered picnic area as well as three barbecue grills. It also has a baseball diamond, basketball, and handball courts.

Gardiner's Fire Department offers many social events throughout the year, including the Penny Social and the Plant Sale.

The Phillies Bridge Farm Project has a long-standing history in the area as well. The land is the oldest working farm in New York state. Their Community Supported Agriculture Program serves one hundred families in the area and is a completely non-for-profit organization.

Rev. James Mee was pastor of St. James Church in Milton. He also attended missions in Marlboro and Ireland Corners, an early name for Gardiner). In 1884 this was made a separate mission with Wallkill and New Paltz attached under the care of an English priest, Rev. Charles Browne. The Church of St. Charles Borromeo was dedicated at Gardiner. In 1886 Rev. Joseph L. Hoey was named pastor.

Gardiner is at the center of Ulster County. It is bordered by Kerhonkson to the north and west, to the north by New Paltz, to the west by Wawarsing, to the east by Plattekill, and to the south by Shawangunk.

The Wallkill River flows from south to north through the center of the town. The Shawangunk Mountains are partly in the western part of the town.

There were 1,997 households out of which 36.3% had children under the age of 18 living with them, 58.1% were married couples living together, 7.2% had a female householder with no husband present, and 30.4% were non-families. 21.6% of all households were made up of individuals and 5.6% had someone living alone who was 65 years of age or older. The average household size was 2.60 and the average family size was 3.07.

Communities and locations in Gardiner

All content from Kiddle encyclopedia articles (including the article images and facts) can be freely used under Attribution-ShareAlike license, unless stated otherwise. Cite this article:
Gardiner, New York Facts for Kids. Kiddle Encyclopedia.