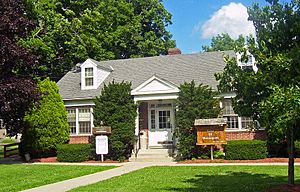 Shawangunk is a town in southwestern Ulster County, New York, United States. The population was 14,332 at the 2010 census. Like the neighboring mountain range, for which it is named, it is pronounced either as the Munsee Lenape, Shawangunk or as the colonial Shongum SHON-gum by local residents. (See Shawangunk Ridge.)

Shawangunk was first settled by Europeans around 1670. The region was organized as a precinct in 1743, and became the Town of Shawangunk in 1788. The town's name comes from the Dutch translation of the Munsee Lenape. The Lenape pronunciation for the town was "Scha-WAN-gunk." In Lenape, "Schawan," means "it is smokey air." This was given as referring to the nearby Catskill Mountains which were known as the "Hidden Mountains." The mountain ridge that runs from southwest to northeast creates a heavy humidified atmosphere that would make the Lenape believe the area had smokey air. A Lenape linguist, Raymond Whritenour suggests that the name comes from the burning of a Munsee fort by the Dutch in the year 1663. This fort was nearby a creek later known as the Shawangunk Kill and also what is now known as Old Fort Road. The burning of the fort signaled the end of the Second Esopus War and helped spread the name to the nearby ridge by the early 1700s. Present day citizens of Shawangunk refer to themselves as living in Wallkill, Pine Bush, or other hamlets depending on which part they live in. This has been in part due to the large size and growing population of the town.

The south town line and half of the east town line is the border of Orange County, New York.

The Wallkill River flows through the eastern half of town and lends it its name, which it flows through, while the western (Walker Valley) half climbs the slopes of the eponymous mountains.

There were 3,433 households, out of which 39.2% had children under the age of 18 living with them, 61.5% were married couples living together, 8.4% had a female householder with no husband present, and 25.5% were non-families. 20.2% of all households were made up of individuals, and 7.0% had someone living alone who was 65 years of age or older. The average household size was 2.78 and the average family size was 3.21.

Statistics about housing in the town:

Something the Shawangunk town and mountain ridge have long been known for is their geology. Rising 2,000 feet above the town are the Shawangunk Mountains primarily consisting of quartz. The mountains were created over 10,000 years ago during the last ice age when retreating glacial ice carved out the Shawangunk Mountains and the surrounding Catskills. To this day the beautiful quartz landscapes can be seen from miles away drawing tourists and climbing enthusiasts from all over the world. The mountainous area is also known for its water bodies of high acidity. Three of the "Sky Lakes," in Minnewaska State Park Presereve are so acidic they cannot support any wildlife. The high acidity is caused by the high quartz makeup of the soil which aids in the runoff of acidic rains. The high acidity in the water does lead to an abundance of rare plant species that normally do not grow in Northeastern New York. Clusters of Quercus illcifolia and Pinus rigida can be found throughout the region.

Communities and locations in Shawangunk

All content from Kiddle encyclopedia articles (including the article images and facts) can be freely used under Attribution-ShareAlike license, unless stated otherwise. Cite this article:
Shawangunk, New York Facts for Kids. Kiddle Encyclopedia.