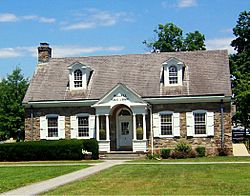 Wallkill is a hamlet (and census-designated place), generally identified as coterminous with ZIP code 12589, telephone exchange 895 in the 845 area code and most of the Wallkill Central School District located mostly in the eastern half of the Town of Shawangunk, Ulster County, New York but partly spilling over into adjacent regions of the Orange County towns of Newburgh and Montgomery. The population was 2,288 at the 2010 census.

The community is in the Town of Shawangunk. Residents affectionately refer to the town by its unofficial nickname "The Kill". The Wallkill Correctional Facility and Shawangunk Correctional Facility are located in Wallkill. The hamlet's attractions include the Walden–Wallkill Rail Trail, the Original Borden Farm (namesake for the area's middle school), the Wallkill River, the Magnanini Winery, and for its proximity to the Shawangunk Mountains.

Before European settlement, this area was populated by the Munsee branch of the Lenape (Delaware) people, who occupied the upper Delaware Valley, the adjacent Catskill foothills, and most of what is now the state of New York south of the Catskills, as well as northern New Jersey (Kraft 2001). The Waronawanka (Waranawankong), known to history as the Esopus Indians, were the Munsee tribe present in the region of the Shawangunk Grasslands Refuge. They inhabited the Rondout-Wallkill Valleys/Shawangunk Mountain region southward to their boundary with the Murderer’s Kill Indians (Moodna Creek, near Cornwall) and southwestward along the Shawangunks to their border with the Minisink tribe, near where present Interstate 84 crosses the ridge in western Orange County (Fried 2005).

A number of Indian tribes served as mediators between the Esopus and the Dutch during the Esopus Wars, including not only nearby tribes such as the Mohicans and Wappingers, but also the Mohawks, Senecas and Hackensack Indians, whose proximity to the major Dutch settlements at Fort Orange and New Amsterdam made them useful to both sides (Fried 1975). In 1664, a peace treaty ended the final conflict with the now impoverished Esopus Indians. Later the same year, the Dutch lost their North American colonies to the English. By1684, the Esopus tribe had sold most of their ancestral lands to the colonies, though many Indians continued living on portions of the land until settlers actually took possession during succeeding decades.

The Lenape population had been ravaged not only by war, but by European diseases for which they had no natural immunity. The last known sale of land by an Esopus Indian in Ulster County occurred in 1770 (Fried 2005). The refuge itself lies close to two sites of great historic interest; only a mile to the west, the Esopus tribe had a major village on the Shawangunk Kill that was the scene of a dramatic battle and rescue of prisoners by Dutch forces in 1663,during the Second Esopus War.

Wallkill is also a destination for international visitors to Watchtower Farms, which draws tens of thousands each year to a free guided tour of its printery. The Watchtower Society (a legal entity of Jehovah's Witnesses) has operated the facility since 1963, initially to produce food cost-effectively for volunteer workers at its offices and printeries in Brooklyn, New York. Some printing of Awake! and The Watchtower began at Wallkill in 1973, and by 2004 their entire United States printing operation was shifted from Brooklyn to an expanded Wallkill printery. The Watchtower printery at Wallkill is considered an example in automated printing, binding, and packaging. Aside from those run for the federal government, Watchtower's Wallkill plant is the largest in-plant printing operation in the United States.

The Wallkill River flows north past the hamlet.

There were 788 households out of which 39.0% had children under the age of 18 living with them, 57.7% were married couples living together, 7.6% had a female householder with no husband present, and 29.4% were non-families. 25.4% of all households were made up of individuals and 9.3% had someone living alone who was 65 years of age or older. The average household size was 2.72 and the average family size was 3.26.

All content from Kiddle encyclopedia articles (including the article images and facts) can be freely used under Attribution-ShareAlike license, unless stated otherwise. Cite this article:
Wallkill, Ulster County, New York Facts for Kids. Kiddle Encyclopedia.