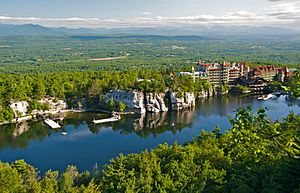 The National Historic Landmark Program's "Statement of Significance", as of the site's historic landmark designation in 1986, stated:

Begun in the 1870s as a small resort for family and friends by the Smiley brothers, it became so popular that it was enlarged many times. Because of the Smileys' love of the outdoor life, the area around the hotel was treated as an integral part of the attractions of the resort. Much of this area was planned as an experiment in conservation of the natural environment, and as an educational tool for the study of botany, geology, and outdoor living.

The resort is located on the shore of Lake Mohonk, which is half a mile (800 m) long and 60 feet (18 m) deep. The main structure was built by Quaker twin brothers Albert and Alfred Smiley between 1869 and 1910.

From 1883 to 1916, annual conferences took place at Mohonk Mountain House, sponsored by Albert Smiley, to improve the living standards of Native American Indian populations. These meetings brought together government representatives of the Bureau of Indian Affairs and the House and Senate committees on Indian Affairs, as well as educators, philanthropists, and Indian leaders to discuss the formulation of policy. The Haverford College library holds 22,000 records from the 34 conference reports for researchers and students of American history.

The hotel hosted the Lake Mohonk Conference on International Arbitration between 1895 and 1916, which was instrumental in creating the Permanent Court of Arbitration in The Hague, Netherlands. Those conference papers were donated by the Smiley Family to Swarthmore College for research.

The house was given a United Nations Environment Programme Award in 1994 in honor of "125 years of stewardship". According to the National Trust for Historic Preservation, "Through its buildings and roads, its land, and its spirit, Mohonk exemplifies America's history and culture. Mohonk has since managed to maintain its 19th century character into the 21st century."

The resort was sued in 2014 by 200 guests who had become ill in a norovirus outbreak after staying there. They claimed that the owners had been aware of the gastrointestinal illness at the resort prior to the guests' arrival. The resort settled the claims for $875,000 two years later.

Mohonk Mountain House has 259 guest rooms, including 28 tower rooms, an indoor pool and spa, and an outdoor ice-skating rink for winter use. The property consists of 1,325 acres (536 ha), and much of it is landscaped with meadows and gardens. It adjoins the Mohonk Preserve, which is crisscrossed by 85 miles (140 km) of hiking trails and carriage roads. The Smileys conveyed the majority of their property to the preserve, in 1963. At the time the preserve was called the Mohonk Trust. 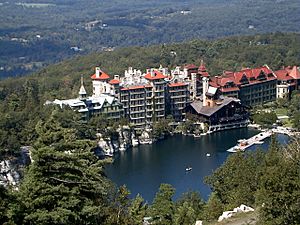 Mohonk Mountain House is a member of Historic Hotels of America, the official program of the National Trust for Historic Preservation.

All content from Kiddle encyclopedia articles (including the article images and facts) can be freely used under Attribution-ShareAlike license, unless stated otherwise. Cite this article:
Mohonk Mountain House Facts for Kids. Kiddle Encyclopedia.