New Paltz (/ˈnuː ˌpɔːlts/; locally: IPA: [ˈnupʰɔəɫz]) is a town in Ulster County, New York, United States. The population was 14,003 at the 2010 census. The town is located in the southeastern part of the county and is south of Kingston. New Paltz contains a village also with the name New Paltz. The name of the town is derived from Palz (pronounced: [palts]), the German dialect name of the Rhenish Palatinate, now a region of Germany called "Pfalz" (pronounced: [Pfalts]).

Due to the presence of what is now the State University of New York at New Paltz, it has been a college town for over 150 years.

The Town of New Paltz was founded in 1678 by French Huguenots by both patent from the governor and purchase from the local Esopus tribe of the Lenape people. The Huguenots were religious refugees who had immigrated via Mannheim in the German Palatinate, where they had settled after fleeing France during religious persecution. They settled in the area of the present-day village of New Paltz (on what is now known as Huguenot Street Historic District) and established their own local government.

The Wallkill River flows northward through New Paltz on its way to join the Rondout Creek, which in turn feeds into the Hudson River.

A portion of the Shawangunk Ridge is in the town. 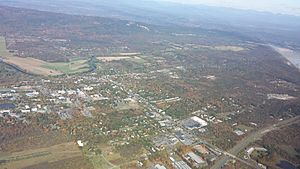 Aerial view of New Paltz at an altitude of 3,500 feet MSL, looking west

There were 4,455 households out of which 26.0% had children under the age of 18 living with them, 40.4% were married couples living together, 9.0% had a female householder with no husband present, and 47.3% were non-families. 31.2% of all households were made up of individuals and 8.4% had someone living alone who was 65 years of age or older. The average household size was 2.36 and the average family size was 2.99.

New Paltz is accessible by a number of different roads. Interstate 87 (the New York State Thruway) is the main thoroughfare and passes through in the eastern part and houses Exit 18 for Route 299. State routes that traverse through are Route 32, Route 208, and Route 299.

The nearest train station is about 11 miles (18 km) away, in Poughkeepsie. Both Amtrak and Metro-North trains serve Poughkeepsie.

All content from Kiddle encyclopedia articles (including the article images and facts) can be freely used under Attribution-ShareAlike license, unless stated otherwise. Cite this article:
New Paltz, New York Facts for Kids. Kiddle Encyclopedia.