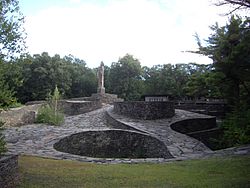 In the 1650s, Barent Cornelis Volge operated a sawmill on the Sawyer's Kill, supplying lumber for the manor of Rensselaerswick. He had secured a title from the Esopus Sachem to this lands sometime before 1663. Volge likely left the area at the outbreak of the first Esopus War in 1658. The "footpath to Albany" was not laid out until 1670. In April 1677 Governor Edmund Andros purchased land from the Esopus Indian Kaelcop, chief of the Amorgarickakan tribe for the price of a piece of cloth, a blanket, some coarse fiber, a loaf of bread, and a shirt. The Mynderse House was built by John Persen, formerly of Kingston, an early mill owner, around 1685.

In October 1710, 300 families who had immigrated to England from the Palatine region of Germany established camps on the east and west side of the Hudson. The camp on the west side of the river became known as West Camp in the Town of Saugerties. They were sent by the British government to manufacture naval stores for Her Majesty's fleet. The villages at West Camp were called Elizabethtown, Georgetown, and Newtown. Sawmills were established on the Esopus Creek. In 1998 a monument commemorating their arrival was erected on the lawn of St. Paul's Lutheran Church in West Camp.

Sometime before 1730 the Katsbaan area northeast of the village was settled by Dutch farmers from Kingston and Palatines from the "Camps". In 1732, they built a stone Dutch Reformed Church.

During the American Revolution, a British Squadron lay anchor at Saugerties from October 18–22, 1777, while raiding parties burned Clermont and Belvedere, across the Hudson River. These were the estates of Margaret Beekman Livingston and her son, Chancellor Livingston. The British also burned sloops near the Esopus Creek, and several homes and barns. While here, British General Vaughan learned of Burgoyne's surrender at Saratoga on October 17. On October 22, 1777, the British fleet left from the Mid-Hudson Valley, never to return.

The town was organized from the town of Kingston on April 5, 1811. At that time the hamlet of Saugerties contained twenty-one houses.

Henry Barclay (1778-1857), was an importer from Manhattan who, with his wife Catherine (1782-1851), came to Saugerties about 1825. Barclay, who had business relationships with Robert L. Livingston, had a dam constructed on the Esopus Creek near today’s 9W bridge. Around 1828 he established the Ulster Iron Works to produce bar and hoop iron. It had a capacity for manufacturing about 6,000 tons annually. and employed about 300 hands working round the clock shifts. In 1830 Henry Barclay built a paper mill powered by water from the Esopus Creek, which at that location had a fall of thirty-one feet. Barclay imported skilled workers and engineers from England to man his mills.

Upon Barclay's death in 1851, the mill was taken over by the Sheffield Company. The Sheffield Paper Mills, of I.B. Sheffield, manufactured writing paper. There were two buildings. They were rebuilt in 1860 by Messrs. White & Sheffield, and again rebuilt in 1868-9. The mills produced two and a half tons of paper daily, and employed about 130 people. William Sheffield built the Clovelea mansion around 1880. In 1888 Martin Cantine built a paper mill on the North side of the dam, and in 1903, the Cantine Company bought out the Sheffield mill. The Cantine mill closed in 1975. Part of the complex has been renovated as senior citizen housing.

In 1832, blue stone was quarried in nearby Toodlum (now Veteran).At one time, 2,000 men were employed in quarrying, dressing and shipping about one and a half million dollars’ worth of blue stone annually from Glasco, Malden, and Saugerties. Blue stone was used for curbing, paving, door sills, and window sills: much of it in New York City. The Ulster White Lead Company at Glenerie produced nine hundred tons of lead each year.

The ice industry thrived during the 1880s to 1900′s. Icehouses were located in Glasco and Malden. Ice was also harvested on the Upper Esopus and on the Sawyerkill. The brick industry also began in Glasco.

In the early hours of November 9, 1879, the steamer Ansonia of the Saugerties Line ran against the Lighthouse dock on its return trip from New York, smashing the paddle wheel. A tug from Kingston hauled the steamer off the flats, and it was taken to New York City for repairs. In 1889 Robert A. Snyder, John and George Seaman, Henry L. Finger, and James and William Maxwell started the "Saugerties and New York Steamboat Company". In 1892, the steamboats M. Martin and Tremper arrived at Saugerties at the same time, and collided near the lighthouse as each tried to get to the dock first. IN 1903, the steamboat Saugerties, burned to the waterline and the charred remains were scuttled in the cove north of the lighthouse. The remains can sometimes be seen at very low tides.

In 1890 the Orpheum Theater was built by John Cooper Davis. It was a center for movies, basketball, vaudeville acts and roller skating. Lucille Ball, and Burns and Allen performed at the Orpheum.

In 1906 Poultney Bigelow, editor and co-owner of the New York Evening Post, built Bigelow Hall in Malden. In April 1910, the Esopus Creek flooded the village of Saugerties.

The Hudson Valley Garlic Festival was established in 1989 by Pat Reppert of Shale Hill Farm and Herb Gardens. In 1992, the Kiwanis Club of Saugerties took over sponsorship of the festival and moved it to Cantine Field where the festival is held on the last full weekend of every September. It attracts about 50,000 people during the two-day weekend.

In 2014, Saugerties was home to the Hudson Music Project- which notoriously became known as the "Mudson Project". After 2 days of music and other festivities, the festival came to an abrupt halt on the third and final day as rain and mud overcame the concert and camp areas. Hundreds were left without food and water when their cars became stuck in the muck that dominated the camp ground. When the rain subsided, many campers stayed and continued to party through the night.

Catholic laborers, principally quarrymen of Fish Creek, also known as "The Clove", were accustomed to go on Sundays to St. Mary of the Snow, in the village, for Mass, and sometimes disorders ensued. At that time the Saugerties congregation was served by Father Michael Gilbride, pastor in Hudson. Mr. Russell, owner of the quarries offered Gilbride land for a church, and St. John the Evangelist was established.

Rev. Michael C. Power, pastor of St. Mary of the Snow from 1852 to 1878, built a church in Quarryville. Rev. Michael Haran, of St. Joseph's in Kingston, was named pastor in 1886. He worked in Quarryville for seventeen years, also serving a mission in Shokan. 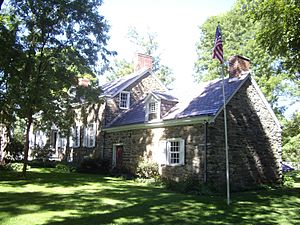 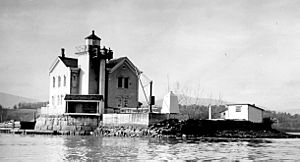 Construction began on the original lighthouse in 1835 to guide ships away from shallows and into Esopus Creek. It was built on a pier made of chestnut cribbing filled with stone. The original source of light came from five whale-oil lamps with parabolic reflectors. It burned down in 1848. It was rebuilt by 1850, with four mineral-oil lamps, replacing the whale oil lamps.

In 1867 Congress appropriated $25,000 for the construction of a new lighthouse. It was built on a circular stone base, 60 feet (18 m) in diameter. The mineral-oil lamps from the original lighthouse were moved to the new building. Two years later in 1869, the newly built lighthouse became functional. In 1873, a lantern room made out of cast-iron was installed with an iron-plate walkway that wrapped around for cleaning the outside panels of glass.

In 1888 Saugerties harbor was dredged to improve access to the Esopus Creek. A small jetty was constructed from the fill linking the lighthouse to the mainland.

In 1909, a fog bell was installed in the lighthouse. In the late 1940s, telephone, electricity and steam heat were added. In 1954, the automation of light made light keepers unnecessary so the Coast Guard closed the lighthouse. The Saugerties Lighthouse Conservancy was established in 1985 with the mission to restore and maintain the lighthouse. After extensive restoration, it was recommissioned by the Coast Guard as an aid to navigation. The foundation for the original lighthouse remains as a small island adjacent to the existing lighthouse.

In 2016, a Kingston Creative study of social media data found that the Catskill Animal Sanctuary, Opus 40, and HITS were the most-Instagrammed locations in town, indicating that they were the leading drivers of tourism.

Communities and locations in the Town of Saugerties 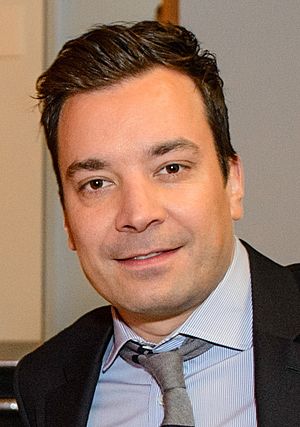 All content from Kiddle encyclopedia articles (including the article images and facts) can be freely used under Attribution-ShareAlike license, unless stated otherwise. Cite this article:
Saugerties, New York Facts for Kids. Kiddle Encyclopedia.