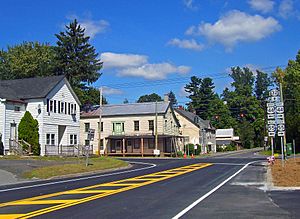 Modena is a hamlet in Ulster County, New York, United States. It is located in the northwestern corner of the town of Plattekill, centered at the junction of the US 44/NY 55 concurrency and NY 32.

The area was first settled in the late 17th century and was originally called "Clark's Corner". The name was changed to Modena in 1829, and the hamlet most likely was named for the Italian city of Modena.

It has long been a primarily rural community with minimal development, although that has been changing enough for Hannaford to build one of its supermarkets on Route 32 just south of the junction.

The Cole-Hasbrouck Farm Historic District and Thaddeus Hait Farm are listed on the National Register of Historic Places.

All content from Kiddle encyclopedia articles (including the article images and facts) can be freely used under Attribution-ShareAlike license, unless stated otherwise. Cite this article:
Modena, New York Facts for Kids. Kiddle Encyclopedia.