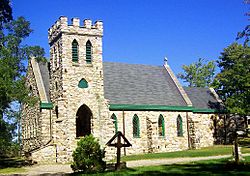 Cragsmoor is a hamlet (and census-designated place) in Ulster County, New York, United States. The population was 449 at the 2010 census.

Cragsmoor is located atop the Shawangunk Ridge, in the south part of the Town of Wawarsing. Sam's Point Preserve is near Cragsmoor.

Cragsmoor, originally named Evansville, was founded as an art colony in 1879, after being discovered by artists earlier in the decade. It was renamed to Cragsmoor in 1893.

Chetolah and the Cragsmoor Historic District are listed on the National Register of Historic Places.

According to the United States Census Bureau, the CDP has a total area of 4.4 square miles (11 km2), all land.

The center of town is about 1,800 feet (548.6 m) above sea level, much higher than neighboring communities such as Ellenville and Walker Valley.

As a whole, the hamlet has a wooded, rustic ambience. Most homes are rather modest and old, but sit on large lots with many tall shade trees. There are also many large undeveloped woodlots, and thus property values in Cragsmoor are higher than in the rest of Wawarsing. Other than the post office, there is no business district to speak of.

In 1996 the 3,620 acres (14.6 km2) comprising much of the hamlet's center were added to the National Register of Historic Places as the Cragsmoor Historic District, due to buildings designed by Bert Goldsmith and Frederick S. Dellenbaugh.

The Long Path hiking trail passes through the center of town on its way to Sam's Point.

There were 189 households, out of which 29.6% had children under the age of 18 living with them, 59.3% were married couples living together, 8.5% had a female householder with no husband present, and 27.5% were non-families. 20.1% of all households were made up of individuals, and 9.0% had someone living alone who was 65 years of age or older. The average household size was 2.51 and the average family size was 2.92.

All content from Kiddle encyclopedia articles (including the article images and facts) can be freely used under Attribution-ShareAlike license, unless stated otherwise. Cite this article:
Cragsmoor, New York Facts for Kids. Kiddle Encyclopedia.