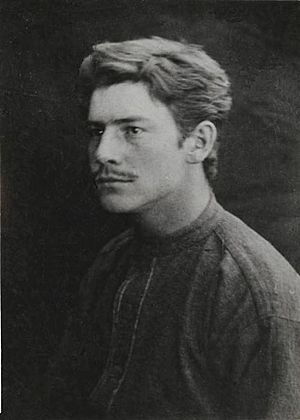 He was born in McConnelsville, Ohio and was educated in the United States and in Europe. An explorer of the American West at an early age, he was a member of an expedition that discovered the last unknown river in the United States, the Escalante River and the previously undiscovered Henry Mountains.

From 1871 to 1873, he was artist and assistant topographer with Major Powell's second expedition down the Colorado River. He joined the 1899 Harriman Alaska Expedition financed by railroad magnate E. H. Harriman. He served as librarian of the American Geographical Society (1909–1911), and became a fellow of the American Ethnological Society. He helped to found the Explorers Club in 1904. 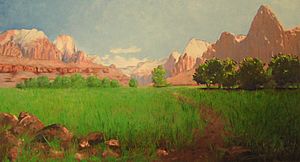 Painting of Zion Canyon, by Dellenbaugh, 1903

All content from Kiddle encyclopedia articles (including the article images and facts) can be freely used under Attribution-ShareAlike license, unless stated otherwise. Cite this article:
Frederick Samuel Dellenbaugh Facts for Kids. Kiddle Encyclopedia.