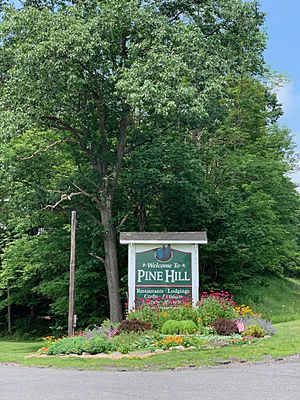 Pine Hill is a hamlet (and census-designated place) in the western part of the town of Shandaken in Ulster County, New York, United States. As of the 2010 census, the CDP had a total population of 275.

Pine Hill became an important tourist community when the Ulster and Delaware Railroad railroad reached it in 1872. It was known as the "Saratoga" of the Catskills due to the local Crystal Springs bottling company. In 1895, Pine Hill became an incorporated village, but the village voted to dissolve its incorporation in 1985, becoming an unincorporated entity (hamlet).

The community is inside the Catskill Park.

There were 149 households, out of which 29.0% had children under the age of 18 living with them, 46.3% were married couples living together, 14.8% had a female householder with no husband present, and 53.7% were non-families. 43.6% of all households were made up of individuals. The average household size was 1.85 and the average family size was 2.52.

All content from Kiddle encyclopedia articles (including the article images and facts) can be freely used under Attribution-ShareAlike license, unless stated otherwise. Cite this article:
Pine Hill, New York Facts for Kids. Kiddle Encyclopedia.