Cornwall is a town in Orange County, New York, United States. As of the 2010 census, the population was at 12,646. Located about 50 miles north of New York City on the western shore of the Hudson River, Cornwall has become a bedroom community for New York City. Commuter rail service is available via the Salisbury Mills-Cornwall train station, operated by NJ Transit, and several other nearby stations on Metro North Railroad. While the town is located less than an hour from the George Washington Bridge, major commuter routes like the New York State Thruway and the Palisades Parkway run nearby, but not through the heart of Cornwall.

When the explorer Henry Hudson visited the region in 1609 the land was occupied by the Waoraneck Indians. In 1685 a colony of twenty-five Scottish families settled around the mouth of the Moodna Creek, led by the soldier Major Patrick McGregor and his brother-in-law, David Toiseach, the laird of Monzievaird. In the ensuing 50 years, English and Scotch families came to the fertile tableland above the river meadows naming it "new Cornwall" because of the marked similarity to the County of Cornwall, England, It is believed that the hamlet of Canterbury was the site of this settlement. The first recorded Town meeting was held in April 1765. In 1788, Orange county was subdivided into numerous townships, thus producing the town of "New Cornwall." The town's name was subsequently changed from "New Cornwall" to "Cornwall" in 1797. The late 1800s were the heyday of Cornwall's fame. It became a summer resort because of the natural beauty of the river, its mountain vistas, scenic trails, fresh country air and convenience to New York City via riverboat or railroad.

The area that was to become to Town of Cornwall was part of Governor Dongan's 1685 Tract. The Precinct of Cornwall was created in 1764. The Town was founded in 1788 as New Cornwall, which was changed in 1797 to Cornwall.

In the mid-19th century, Cornwall took on another personality – a health retreat. Until the early 20th century, city folk flocked to the Valley to experience the therapeutic powers they believed it to hold. The mountains, fresh air and evergreen forests were thought to offer the perfect conditions for good health and they were not far from the city. Cornwall on the west side of the Hudson became especially popular as a health retreat, offering numerous boarding houses and many conveniences of the day, including accessibility to the railroad and steamboats, as well as a telegraph office and large library. Nathaniel Parker Willis, one of the Knickerbocker writers, enjoyed the time he spent here so much he bought property in Cornwall, establishing a country home he called Idlewild. His many writings on the area helped make Cornwall a popular spot for health-seekers.

Shifting attitudes toward a more healthy lifestyle began to make the Hudson Valley popular for outdoor activities and exercise. Hiking, rowing, swimming, fishing, hunting and biking all contributed to the development in the area of summer camps as well as the notion of the summer vacation. 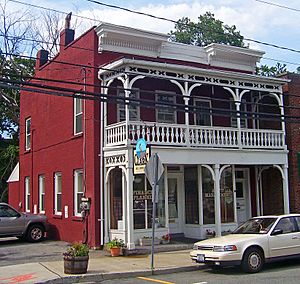 The A.J. Clark Store is located at 286 Main Street in downtown Cornwall. Archer Clark built the Italianate building to house his butcher shop around 1875, after an 1870 fire destroyed his earlier quarters. It would continue in existence in that building for a century. Later, one of his descendants converted it into a delicatessen. In 1996 it was added to the National Register of Historic Places as an intact commercial building dating from Cornwall's days as a summer resort town in the late 19th century. 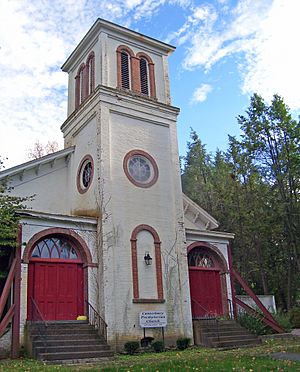 The Canterbury Presbyterian Church is located along Clinton Street in downtown Cornwall. A white stone and brick building in the Federal style, with later Colonial Revival style additions, it has been listed on the National Register of Historic Places since 1996.

The Carvey-Gatfield House is a stone house along Angola Road in Cornwall. It was built in the first decade of the 19th century in the Federal style. The land was originally the property of Isaac Bobbin, an early settler, until subdivided into the present parcel and sold to Mathias Carvey in 1805, around the time the house was built. Carvey had bought the property from William Robinson, two owners removed from Bobbin, to support his mill on a nearby stream. He in turn sold it to Benjamin Gatfield, in whose family it would remain for almost a century. It was added to the National Register of Historic Places in 1996. 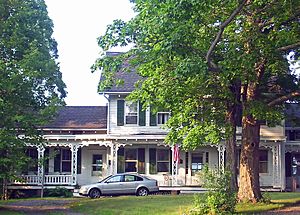 The Oliver Brewster House is a Gothic Revival home located on Willow Avenue, across from Willow Avenue Elementary School. It was originally built as a farmhouse in the mid-19th century. Later, as Cornwall became a popular summer resort for visitors from New York City, it was expanded and renovated for use as a boardinghouse as well. In 1996 it was added to the National Register of Historic Places.

The Samuel Brooks House is located on Pleasant Hill Road north of the hamlet of Mountainville. Brooks, a descendant of one of Cornwall's oldest families, built this as a farmhouse around 1860. After the Civil War, summer boarders from New York City began coming to Cornwall, and Brooks quickly adapted it for use as a boardinghouse. Its location, near Schunemunk Mountain made it a desirable location for the summer boarders who made Cornwall a popular resort community in the late 19th century. In 1996 it was listed on the National Register of Historic Places.

In 1962, a 17-year legal battle began that launched modern-day environmental activism. Consolidated Edison proposed building a giant hydro-electric plant on the river at Storm King Mountain near Cornwall. Despite pressure from local residents, Con Ed went forward with its plan, applying to the Federal Power Commission for a license to operate such a facility. Three years later, after hearings and appeals and more hearings, the U. S. Court of Appeals set a major precedent when it sent the case back to the FPC to start the process over again. Its reasoning was based on the commission's refusal to hear much of the environmental impact testimony the first time around. For the first time in U.S. history, a court had decided that protection of natural resources was just as important as economic gain. It prompted Congress to pass the National Environmental Policy Act in 1969, which requires an environmental impact study on all major projects needing an OK from the federal government.

Cornwall's terrain is quite diverse, with considerable relief. It is shaped by the valleys of Moodna and Woodbury creeks, and includes estuarine salt marshes, heavily developed residential and commercial areas, rolling farms, and rocky, scrub-covered ridges and mountaintops. There are two major protected areas mostly within the town, Storm King State Park and the privately managed Black Rock Forest.

The most level section is in the northeast corner, east of the curve of US 9W, sloping gently to the river, where it borders on the towns of Fishkill and Philipstown in Dutchess and Putnam counties respectively, across the river. Here is located the village of Cornwall on Hudson, and the most developed section of the town proper, the area usually meant by Cornwall, just to the southwest of the village. To its west lies another residential area, Firthcliffe, named for the carpet factory once located here along the banks of Moodna Creek. Much of the town's population is concentrated in the village and this area.

In its south section, Cornwall on Hudson rises to the high area known as Deer Hill, a foothill to Storm King Mountain to its immediate south. South of Storm King the town's southeast boundary, with Highlands, leaves the river just north of Crow's Nest and runs through Storm King State Park, taking in most of Black Rock Forest. It turns more southerly, taking in the northwestern sliver of the United States Military Academy Reservation before reaching Cornwall's southernmost point, its tripoint with Highlands and the town and village of Woodbury.

This area of town is also mountainous and rugged, with the border descending along a northwesterly line to the narrow Woodbury Creek valley, where NY 32 and the New York State Thruway enter the town. At the valley's mouth, where Woodbury Creek drains into Moodna Creek, is the small hamlet of Mountainville, with its own fire district and ZIP Code. It gets its name from Schunemunk Mountain, where the town line climbs the northern end of Schunemunk, reaching the town's highest elevation at 1,540 feet (470 m) at the tripoint with Woodbury and Blooming Grove.

Just past Schunemunk's western ridge, the town line reaches another corner and changes course to due north. This takes in the rural, rolling countryside between the mountain and Salisbury Mills, where Storm King Art Center is located and the Moodna Viaduct, the highest and longest railroad trestle east of the Mississippi River, spans the valley between Schunemunk and the Salisbury Mills-Cornwall station on the Metro-North Port Jervis Line. This trestle was shown in the 2007 film Michael Clayton and is a well-known landmark. NY 94 runs through this section of town.

The town's northeast corner is another tripoint, with Blooming Grove and New Windsor, located in the middle of Beaverdam Lake. From there the New Windsor boundary runs east, trending slightly to the north, just south of the hamlet of Vails Gate back to the salt marshes where the Moodna drains into the Hudson. 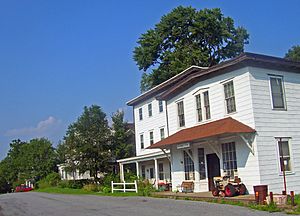 Communities and locations in Cornwall

There were 4,625 households out of which 36.9% had children under the age of 18 living with them, 60.2% were married couples living together, 8.7% had a female householder with no husband present, and 28.0% were non-families. 24.2% of all households were made up of individuals and 10.0% had someone living alone who was 65 years of age or older. The average household size was 2.65 and the average family size was 3.18.

All content from Kiddle encyclopedia articles (including the article images and facts) can be freely used under Attribution-ShareAlike license, unless stated otherwise. Cite this article:
Cornwall, New York Facts for Kids. Kiddle Encyclopedia.