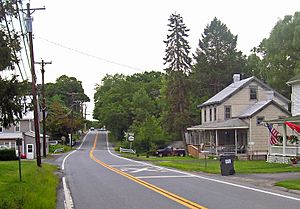 Slate Hill, looking east along US 6.

Slate Hill is one of the eight hamlets found in the town of Wawayanda, New York. It is home to the Minisink Valley Central School District. Slate Hill is found in Orange County, New York, United States, one of the fastest-growing counties in the state. The area, along with its surrounding regions and the county in which it resides, has seen a recent surge in population growth that can be partially attributed to suburbanization from the New York City metropolitan area. This growth reached a peak in the post 9/11 era, but has since seen a decrease in the past three years.

At the dawn of the American Revolution, a Native American by the name of Keghgekapowell supposedly received a patent for the land of present-day Slate Hill, as this is the name found on the Wawayanda Patent. When his tribe, probably from the Algonquin Nation of the Lenni Lenape, had left the land to go West, Keghgekapowell was said to have gone with them never to return. The site of his abandoned estate is located on a hill on present day Jogee Road. The road was named after Keghgekapowell since his name had taken the simpler form of Jogee by European settlers.[1]

One of the early settlers, Richard Wood, built Woodlawn Farm, and was one of the original members of the Primitive Baptist Church of Brookfield. Both his house and church, the oldest buildings in Slate Hill, still stand and are listed on the National Register of Historic Places.

Slate Hill was originally to be named Brookfield, for the brook that encircled the community. When the postal system was establishing itself after the American Revolution, the government had discovered that there already existed a Brookfield in Madison County, N.Y. and thus opted for the name Slate Hill.[2]

All content from Kiddle encyclopedia articles (including the article images and facts) can be freely used under Attribution-ShareAlike license, unless stated otherwise. Cite this article:
Slate Hill, New York Facts for Kids. Kiddle Encyclopedia.