The National Purple Heart Hall of Honor is located on Route 300 in the Town of New Windsor.

The region was originally inhabited by the Munsee people, part of the Lenape confederation. The first European settlers were colonists from Scotland who arrived in 1685. The Town of New Windsor was created in 1762.

Settlement rights in the area that now encompasses the town were obtained from the Munsee by Governor Thomas Dongan, who encouraged the settlement of a party of Scottish colonists led by David Toshack, the Laird of Monzievaird, and his brother-in-law Major Patrick McGregorie. They arrived in 1685 and settled in the area overlooking the Hudson River near Moodna Creek. McGregorie is said to have built a cabin north of the creek on Conwanham's Hill at Plum Point, while Toshack set up a trading post south of the creek on Sloop Hill. In June 1685, Governor Dongan appointed McGregorie Muster-Master of Militia for the City and Province of New York.

A rival claim was obtained in 1694 by Captain John Evans of HMS Richmond, who was granted powers and privileges as lord of the manor. The next governor, the Earl of Bellomont, decided that this was unfair to the settlers, and had the Evans grant annulled in 1699. An additional patent of 1,000 acres was issued in 1709 to William Chambers and William Southerland. Around 1709 the portion of the town nearest the Hudson River was organized under the Precinct of the Highlands (Ulster County), remaining thus until 1743. In 1762, separate precincts were created for the Town of New Windsor and Newburgh.

The name of the town is from Windsor, England, with the New being prefixed. By whom this was conferred cannot be ascertained, but first appears in 1728 records of the London "Society for the Propagation of the Gospel in Foreign Parts". Among one of the earliest roads was the King's Highway, later known as "the Goshen Road", which ran north and south. Among the early residents of the town was William Ellison who kept as early as 1732 kept a store and owned sloops that sailed from New Windsor to New York. Captains James and William Jackson also owned their own sloops.

During much of the Revolutionary War, New Windsor served as the major depot for the Continental Army and Army Medical Dept. The majority of Town residents supported the war efforts and its leaders.

In October 1782, the troops began to arrive and set up tents, while they began building their huts. This encampment or cantonment covered 1600 acres (6.5 km²) and quartered 6000–8000 men, women and children from New York, New Jersey, New Hampshire, Massachusetts and Maryland. Here this army built a log city of over 700 huts for the soldiers and many other out buildings, guardhouses, blacksmith shops, a stable, kitchens, and a hospital. In addition, a long building called the "Temple" was constructed. It was proposed by Rev. Israel Evans, Chaplain to the Army, that a structure be built for religious services. The building also served a general meeting hall. Upon its completion, the officer held a ball.

In order to reward the fidelity and faithfulness of soldiers, Gen. Washington ordered the establishment of an honor, the Badge of Merit, to be bestowed on them. Today, this honor is known as the Purple Heart.

The Little Britain Presbyterian Church was organized by Irish and Scottish immigrants. The first church building was constructed in 1765 used by the Continentals as a hospital. This was subsequently destroyed by fire and a new structure was erected in 1807.

In 1814 the town was divided into nine school districts. The first school was a one-room schoolhouse built on Quassaick Avenue in 1841. Epiphany Apostolic College was founded in 1925. The site is now owned by the Newburgh Enlarged City School District.

Between about 1858 to 1859 the Palmer and Longking company operated on the Quassaick Creek the first large scale factory for the manufacture of "bellows-box" Daguerreotype cameras. The factory, on the site of Sterrit's former pin factory, had approximately thirty-five employees. The building was later converted to a flour mill and subsequently burned down. 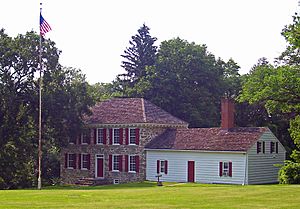 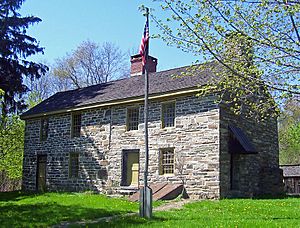 Communities and locations in the Town of New Windsor

New Windsor has a Dfa Köppen climate classification (Humid Continental: Hot Summer subtype). It is situated in the temperate region of the northern hemisphere and has four distinct seasons. 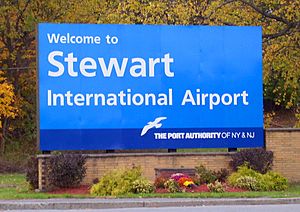 Little Britain Road is one of the oldest in the Town.

Stewart International Airport is located partially in New Windsor and partially in the Town of Newburgh. Formerly Stewart Air Force Base, the airport is named after Capt. Lachlan Stewart, who skippered schooners and other sailing vessels about 1850–1870. Stewart was also a lumber merchant and later retired to a dairy farm. In 1930, his grandson, Thomas Archibald ("Archie") Stewart, persuaded his uncle, Samuel L. Stewart, to donate land at "Stoney Lonesome", to the city of Newburgh for an airport.

Stewart continued as part of the Strategic Air Command until the late 60's early 70's when the Air Force turned the base over to the MTA for use as a cargo facility. The grand plan to create a jetport lead to the acquisition of over 8000 acres (32 km²) of the present day buffer zone and the lost of many early farms and structures. During the late 1980s, through the efforts of the late State Senator Schermerhorn, the airport passed into the hands of the NY State Dept. Of Transportation. Today, Stewart International in addition to its civilian capability, is the home base of the NY Air National Guard & United States Marine Corps Reserve MAG-49 Detachment Bravo.

There is a new entrance to Stewart International Airport, via New York State Route 747. Now for the first time, the Airport can be accessed directly from the Interstates without encountering local traffic on the state roads.

All content from Kiddle encyclopedia articles (including the article images and facts) can be freely used under Attribution-ShareAlike license, unless stated otherwise. Cite this article:
New Windsor, New York Facts for Kids. Kiddle Encyclopedia.