Sugar Loaf is a mixed-use hamlet in Orange County, New York, United States. It is located in the Town of Chester. 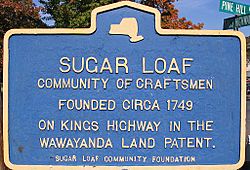 Sugar Loaf, New York, was founded in the late 1740s as a waypoint along Kings Highway, providing supplies and horses to travelers.

The hamlet may possibly draw its name from its similarity to a peak in northern England. However, local historian Dr. Richard Hull writes:

It is still not certain how Sugar Loaf acquired its name. The most plausible tale is that Elizabeth Dobbin, during her first winter here [circa 1738], gazed up at that huge bald uplifted fault block, shrouded in heavy morning mist, so frosty at the summit yet so greenish-brown at the base, and was reminded of the hard loaves of sugar she and all colonial housewives made in their smokey kitchens.

Note that the name of the mountain in Orange County, New York, (as well as the hamlet itself) is somewhat distinguished by the use of two words instead of one.

By the early 19th century, Sugar Loaf was a saloon community. Hambletonian 10, the sire of all American standardbred horses, was born in Sugar Loaf in 1848. America's first murder-for-hire occurred on "Calamity Corners" at the intersection of Pine Hill and Hambletonian Roads.

Throughout the remainder of the 19th century, and for most of the 20th century, Sugar Loaf remained a quiet, pastoral hamlet with renown for bawdy Apple-Jack saloons and later, during Prohibition, speakeasies for the enjoyment of countless jazz-age revelers en route to the Glenmere mansion estate on Pine Hill Road, on Glenmere lake.

For the last half century through today the hamlet has existed as an artists community with a number of artists working and living in buildings and barns that endure from the 17th century. Artist studios are independently owned and operated by the artists themselves with many studios open to the public for viewing work in progress as well as purchasing.

Sugar Loaf is a hamlet of roughly 6 miles length and 5 miles width. It extends from Chester's Durland Hill, near the Chester Library, west into the town of Warwick, into the hamlet of Bellvale.

There is a post office at the northeast end of the village. The Hamlet's zip code is 10981. The Village of Sugar Loaf lies within the Town of Chester, and hence shares its area code and exchange, 845, 469. The greater Hamlet extends into Warwick, as well 845, 986. The Hamlet of Sugar Loaf predates the later Town of Chester, and it was originally administered under the Town of Warwick. Proponents of the annexation of Sugar Loaf back to Warwick cite this precedent administration.

All content from Kiddle encyclopedia articles (including the article images and facts) can be freely used under Attribution-ShareAlike license, unless stated otherwise. Cite this article:
Sugar Loaf, New York Facts for Kids. Kiddle Encyclopedia.