Bellvale is a wooded hamlet in the town of Warwick in Orange County, New York, United States. Situated in the morning shadow of Bellvale Mountain along New York State Route 17A, Bellvale was the site of an iron forge destroyed by British Army soldiers in 1750; many of its homes and other structures date from before American independence. While close to New York City, its location in the Warwick Valley has prevented suburban development.

Leni Lenape of the "wolf" clan known as Munsees occupied the Warwick Valley before the first Dutch trappers appeared on the Hudson River. Munsees lived in long houses made of sapling staves and layers of collected bark; they raised crops using the Three Sisters form of companion planting and utilized the tall-growth forests and streams for hunting and fishing. The Munsees of the area lived in a long house by the creek they called Wawayanda.

Part of a land patent granted by Queen Anne in 1703, Bellvale was called Wawayanda (the name of the patent) in colonial times. Settlers were drawn to the area because of the abundant timber, game and water power readily available from Long House Creek, allowing the operation of water wheel-driven mills. Tanneries, sawmills, gristmills and forges have been served by the fast rushing creek since Lawrence Scrauley first built his trip hammer plating and slitting mill in 1745, the only such mill then operating in New York colony. Scrauley hoped Bellvale's remote location would allow him to escape notice of British authorities intent on shutting down the American colonies' nascent iron-working industry. By 1750, the Iron Act was passed in London requiring Governor George Clinton to report on the plating forge. The mill was later wrecked by the British, and its destruction became one of many incidents leading to the American Revolutionary War.

The Iron Act was repealed in 1758, and though Scrauley didn't rebuild his forge, others built a series of water-powered mills and forges along the fast rushing creek, and by the 1775 the iron-working industries of Sterling Forest, Bellvale and Warwick were capable of creating an immense chain to block the Hudson River at West Point during the Revolution. Each link in the chain weighed 150 pounds; the entire length weighed 188 tons. During the war several gristmills were kept employed making flour and meal for local consumption and for the army's use. Sawmills turned the abundant local maples, oaks and hemlocks into usable boards, and textile mills processed woolen cloth for uniforms and blankets. By the early 1800s Bellvale was a thriving village; the new "Continental road" from Warwick to Tuxedo allowed the community's goods to reach markets closer to the Hudson River. But when the new railroads came through the Warwick valley, Bellvale's best manufacturing days were over. The valley, now cleared of tall-growth trees, became fertile farmland. Wheat and corn were planted. Then as now, apple trees were planted, but then mostly for cider production. 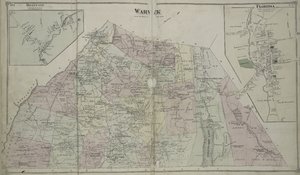 1875 map of Warwick, with Bellvale and Florida

Bellvale is bisected by New York State Route 17A, though one of its older streets, Pumpkin Hill Road, lies along the path of the historic Tuxedo to Warwick road, improved by Continental Army engineers in 1779. Wooden bridges were constructed across Long House creek for the Tuxedo road and on Iron Forge Road, both later replaced by stone arch bridges, now modern concrete structures. Cascade Road begins at NY17A and follows the creek's cascade south for much of its course upwards towards its sources along the ridgetop lakes and marshes of the Bearfort Ridge; the Cascade Park community lies hidden in these mountains along this road.

Eastward of Bellvale Route 17A's roadway rises steeply, passing an active ski resort below the summit of the steep and ancient ridge. Bellvale flags, Middle Devonian layers of sandstone were first identified by N.H. Darton in 1894 in this area. A hawkwatch tower crowns the peak of Mount Peter and the Appalachian Trail crosses the highway on the east face of Bellvale Mountain to the south and Bearfort Mountain to the north. A local dairy in the valley below provides the milk for an ice cream parlor serving passing AT hikers and motorists. After crossing the ridgeline NY17A descends toward the village of Greenwood Lake, where it turns eastward again toward Sterling Forest.

Northward, Lower Wisner Road, named from a prominent early valley family, forks left at the location of Crawley's destroyed mill; Iron Forge Road passes Iron Forge Inn, a restaurant based in a 1760-built grist mill and the Bellvale United Methodist Church, the location of which has served Bellvale residents as a church home for over since 1853. Westward, NY17A rises and falls on foothill ridges of nearby Mount Warwick, passing historic homes and apple orchards before entering the Village of Warwick.

Bellvale is located in the humid subtropical climate zone (Köppen climate classification: Cfa), exhibiting four distinct seasons. Its climate is typical of Mid-Atlantic U.S. areas removed from bodies of water. The hamlet is located in plant hardiness zone 6a though much surrounding Orange County varies from 6 to 7, indicating a cool temperate climate. Summers are warm, spring and fall are mild, with low humidity, while winter is cool, with annual snowfall averaging 23.0 inches (58 cm). Average winter lows tend to be around 20 °F (−5 °C) from mid-December to mid-February. Blizzards affect Bellvale most years. The most violent nor'easters typically feature high winds, heavy rains, and occasional snow. These storms often affect large sections of the U.S. East Coast.

Methodist meetings were held in members' homes as early as 1809, circuit preachers visiting the valley from New Windsor. The upper floor of the schoolhouse provided meeting space for several early area Baptist, Reformed Dutch and Methodist congregations for many years and was nicknamed "The Tabernacle." The Methodist congregation resolved to build a church, the cornerstone of which was laid April 27, 1853 and finally dedicated a year later. The church was solidly constructed of timber cut locally and sawed into planks in the mill standing upstream of the new church site.

The wooden building served the community for 86 years, providing the location for the Bellvale Circus, a popular summer entertainment staffed by local residents. The church suffered catastrophic fire damage in early 1940, and was demolished. The current church building began its career in Spring Glen, New York, where the congregation could no longer afford to host the church, and sold it to the Bellvale congregation for one dollar. The chapel was carefully disassembled and the building, pews, stained-glass windows and organ were lovingly reassembled on the repaired foundation.

All content from Kiddle encyclopedia articles (including the article images and facts) can be freely used under Attribution-ShareAlike license, unless stated otherwise. Cite this article:
Bellvale, New York Facts for Kids. Kiddle Encyclopedia.