Kids Encyclopedia Facts
This page is about the hamlet in Orange County. For the nature preserve in the city of Albany, see Albany Pine Bush.

Pine Bush is a hamlet (and census-designated place) located in the Town of Crawford and adjacent to Shawangunk, New York, within Orange and adjacent to Ulster counties in the U.S.. It is roughly coterminous with the 12566 ZIP code and 744 telephone exchange in the 845 area code. These both extend into adjacent regions of the Town of Shawangunk in Ulster County. (The Pine Bush Central School District takes in part of the Town of Mamakating in Sullivan County as well). The population was 1,780 at the 2010 census.

The community was one of the four early nineteenth century settlements in the jurisdiction of the town. It has previously been known as "Shawangunk," "Crawford," and "Bloomfield." Another community named "Crawford" is located to the northwest in bordering Ulster County. This hamlet was an early terminus for a short line railroad, the Middletown & Crawford Railroad. This line was bought by the Erie railroad, which served the town until the 1970s.

As a result of reported unusual sightings during the mid-1980s, Pine Bush developed a reputation as the UFO capital of New York. This characterization was supported by Ellen Crystall's book, Silent Invasion: The Shocking Discoveries of a UFO Researcher.

The hamlet of Pine Bush is in Orange County and near the border of Ulster. The Pine Bush zip code, 12566, spills over into the Town of Shawangunk in Ulster County, but the Hamlet itself is in Orange County only. The Shawangunk Kill, a small river, marks this boundary. New York State Route 52 and New York State Route 302 intersect at this hamlet, which predates the highways.

There were 612 households out of which 35.6% had children under the age of 18 living with them, 48.2% were married couples living together, 14.1% had a female householder with no husband present, and 32.7% were non-families. 27.8% of all households were made up of individuals and 13.2% had someone living alone who was 65 years of age or older. The average household size was 2.51 and the average family size was 3.08. 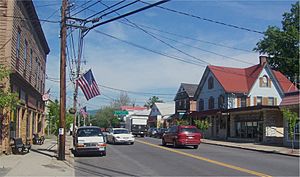 All content from Kiddle encyclopedia articles (including the article images and facts) can be freely used under Attribution-ShareAlike license, unless stated otherwise. Cite this article:
Pine Bush, New York Facts for Kids. Kiddle Encyclopedia.