The area along the Delaware River had long been settled by the Lenape, an Algonquian-speaking indigenous tribe that lived in the mid-Atlantic coastal areas, including western Long Island, and along this river at the time of European colonization. The English also called the people the Delaware, after the river they named after one of their colonial leaders.

Milford was founded in 1796 after the American Revolutionary War as a United States settlement on the Delaware River by Judge John Biddis, one of Pennsylvania's first four circuit judges. He named the settlement after his ancestral home in Wales.

Milford has a large number of historical significant buildings, many constructed in the nineteenth century and early twentieth centuries. Some are listed on the National Register of Historic Places, while numerous others are included in the Milford Historic District, also listed on the NRHP. Of the 655 buildings in the district, 400 of them have been deemed to be historically significant. The district is characterized by a variety of Late Victorian architecture, as well as Mid-19th Century Revival, and Late 19th and 20th Century Revivals.

Grey Towers National Historic Site, the ancestral home of Gifford Pinchot, the noted conservationist, two-time Governor of Pennsylvania and first head of the U.S. Forest Service, is located in Milford. It has been designated a National Historic Landmark.

From 1904 to 1926, Grey Towers was the site of summer field study sessions for the Master's program of the Yale School of Forestry, together with the Forester's Hall, a commercial building that was adapted and expanded for this purpose. Jervis Gordon Grist Mill Historic District, Hotel Fauchere and Annex, Metz Ice Plant, and Pike County Courthouse are also listed on the National Register of Historic Places. Nearby is Arisbe, the home of Charles S. Peirce, a prominent logician, philosopher and scientist in the late 19th century, and another NRHP property.

The Pike County Historical Society Museum in Milford includes in its collection the "Lincoln Flag", which was draped on President Abraham Lincoln's booth at Ford's Theatre the night he was assassinated. The flag was bundled up and placed under the President's head, and still bears his blood. It was kept by stage manager Thomas Gourlay. He passed it down to his daughter Jeannie, an actress who had appeared in the play, Our American Cousin, at the theatre that night. She later moved to Milford and the flag was donated to the museum after her death.

According to the United States Census Bureau, the borough has a total area of 0.5 square miles (1.3 km2), all land.

This is located in the Poconos Mountains, in what was historically a heavily wooded area. When Judge Biddis bought up the land of what was then known as Wells Ferry and laid out the lots for the new town, he generally followed the urban plan of Philadelphia: he laid out High Street – the equivalent of what is now Market Street in Philadelphia – running to the Delaware River, while Broad Street runs perpendicular to High, creating a grid. At the intersection of Broad and High is a public square – just as there is at Broad and Market in Philadelphia – and most of Milford's official buildings are located there. Within the grid, East-West streets are numbered, Second through Seventh, with Broad Street falling between Fourth and Fifth Streets, while North-South streets are named after Judge Biddis' children: Ann, Catherine, George, John, Sarah and Elizabeth. In between both the named and numbered streets are alleys, named after berries and fruit.

In contemporary Milford, Broad Street is also marked as U.S. Route 6 and U.S. Route 209. At its intersection with Harford Street, Route 6 continues north on Harford, while Route 209 continues south on the street.

Milford is located on an escarpment above the Delaware River. All waterways there which drain into the river fall the 100-foot (30 m) difference in height, creating what is known as a fluviarchy, a network of waterfalls, putatively the most notable one east of the Rocky Mountains. These also provided water power to mills, which contributed to Milford's economy in the 19th century.

There were 491 households out of which 19.6% had children under the age of 18 living with them, 35.4% were married couples living together, 10.2% had a female householder with no husband present, and 51.9% were non-families. 42.4% of all households were made up of individuals and 21.4% had someone living alone who was 65 years of age or older. The average household size was 2.01 and the average family size was 2.79. 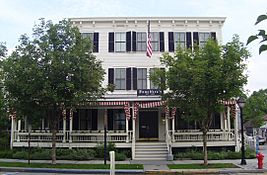 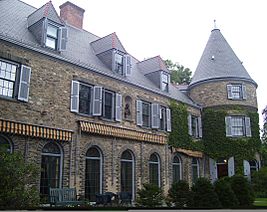 The Pike County Chess Club was founded in 2011. Although attendees no longer meet weekly for casual games, the Club organizes at least one tournament per month at the Patisserie Fauchere. Games played at these tournaments are submitted for rating by the United States Chess Federation (USCF), with which the Club is affiliated.

The Black Bear Film Festival is an annual independent film festival, which takes place the weekend after Columbus Day in October primarily at the historic Milford Theater. It includes many free films and lectures in the Film Salon, as well as feature films for an admission fee.

The Milford Music Festival takes place each June. It is a free weekend event sponsored by Milfordmusicfest.org, which also produces Septemberfest, Share The Harvest and the annual Tree Lighting. The 2009 Milford Music Festival was headlined by Vanessa Carlton, the Grammy-nominated singer/songwriter/pianist who is from Milford. The 2013 edition featured Pete Seeger.

Milford served as setting for a number of silent films directed by D.W. Griffith in the early 1900s, including The Informer starring Mary Pickford, Lillian Gish and Lionel Barrymore. It was also the original location of the Milford Science Fiction Writers Workshop, founded in 1956 by Damon Knight, James Blish and Kate Wilhelm, all residents of Milford at the time. 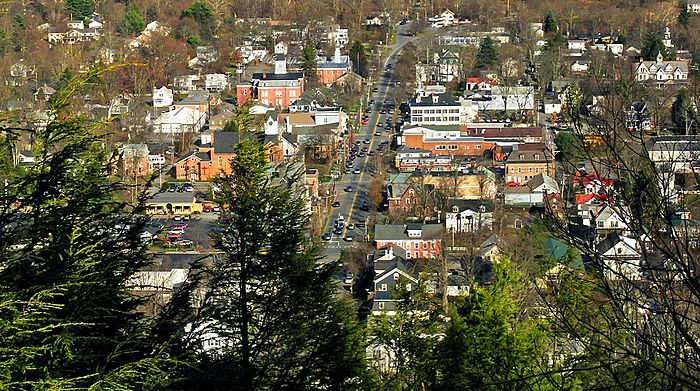 A view of Milford from "The Knob", looking east down Broad Street

All content from Kiddle encyclopedia articles (including the article images and facts) can be freely used under Attribution-ShareAlike license, unless stated otherwise. Cite this article:
Milford, Pennsylvania Facts for Kids. Kiddle Encyclopedia.