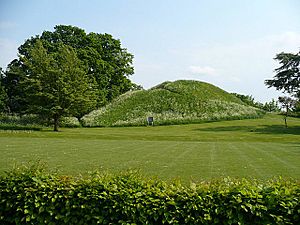 Castle Mound, all that remains of Cambridge Castle on Castle Hill.

Castle Hill is a knoll located in Cambridge, England, located in the Castle ward of the city. Cambridgeshire County Council's headquarters, Shire Hall, are located directly adjacent to Castle Hill.

The hill is the site of the original settlement, north of the River Cam. There is evidence of pre-Roman activity, but the Romans created a town called Duroliponte here. It was a convenient place to cross the river. At the time it was at the head of the navigable part of the river, then known as the River Granta. St Peter's Church, located halfway up the hill, has some pieces of Roman tile in its walls.

In the Anglo Saxon period, the hill was used for defence. In 1068, the Normans built Cambridge Castle on the hill. The castle is no longer extant; only Castle Mound remains.

All content from Kiddle encyclopedia articles (including the article images and facts) can be freely used under Attribution-ShareAlike license, unless stated otherwise. Cite this article:
Castle Hill, Cambridge Facts for Kids. Kiddle Encyclopedia.