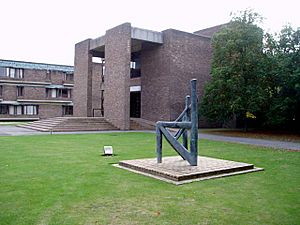 Churchill College is a constituent college of the University of Cambridge, England. It has a primary focus on science, engineering and technology, but still retains a strong interest in the arts and humanities.

In 1958, a trust was established with Sir Winston Churchill as its chairman of trustees, to build and endow a college for 60 fellows and 540 students as a national and Commonwealth memorial to Winston Churchill; its Royal Charter and Statutes were approved by the Queen, in August 1960. It is situated on the outskirts of Cambridge, away from the traditional centre of the city, but close to the University's main new development zone (which now houses the Centre for Mathematical Sciences). Its 16 hectares (40 acres) of grounds make it physically the largest of all the colleges.

Churchill was the first all-male college to decide to admit women, and was among three men's colleges to admit its first women students in 1972. Within 15 years all others had followed suit. The college has a reputation for relative informality compared with other Cambridge colleges, and traditionally admits a larger proportion of its undergraduates from state schools.

The college motto is "Forward". It was taken from the final phrase of Winston Churchill's first speech to the House of Commons as Prime Minister—his famous "Blood, Toil, Tears and Sweat" speech - in which he said "Come, then, let us go forward together".

The student population is divided into two common rooms: the Junior Common Room (JCR) and Middle Common Room (MCR). The former contains undergraduates and the latter advanced students. Fourth year undergraduates studying towards their Masters may choose to be in either. These student bodies organise various academic and social events as well as handling issues regarding welfare. The college funds sports clubs and societies which provide entertainment for students. 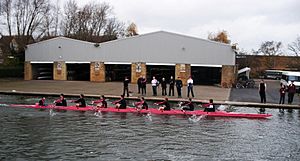 Churchill College Boat Club men's first VIII rowing past their boathouse on the River Cam, the club is noted for its pink boats

With playing fields on site, unlike many other colleges, sport is an integral part of the college. As well as football pitches, a cricket pitch and others, the facilities include a gym, and tennis and squash courts.

Churchill is a relatively young college, and prides itself on being modern and forward looking. It has relatively few traditions. Students are not required to wear gowns at formal halls, with exception of certain college feasts.

All content from Kiddle encyclopedia articles (including the article images and facts) can be freely used under Attribution-ShareAlike license, unless stated otherwise. Cite this article:
Churchill College, Cambridge Facts for Kids. Kiddle Encyclopedia.