Wendover is a market town and civil parish at the foot of the Chiltern Hills in Buckinghamshire, England. It is situated at the point where the main road across the Chilterns between London and Aylesbury intersects with the once important road along the foot of the Chilterns. The town is some 35 miles (56 km) north west of London and 5 miles (8 km) south east of Aylesbury, and is very popular with commuters working in London.

The parish has an area of 5,832 acres (2,360 ha) and had, at the time of the 2011 census, a population of 7,399. Outside the town of Wendover, the parish is mainly arable and also contains many hamlets that nestle amongst the woodlands on the surrounding hills. Although Wendover has a weekly market, and has had a market charter since medieval times, many of its inhabitants identify it as a village, and the parish council does not describe itself as a town council.

The town name is of Brythonic origin and means "white waters", pertaining to the stream that rises in the adjacent hills and flows through the middle of the town, bringing chalk deposits on its way.

In 1086 the manor of Wendovre was in the hundred of Aylesbury, with William the Conqueror as its tenant in chief.

The parish church of St Mary is outside the town to the east on the hillside: a feature that is very common among towns with strong Celtic origins. There is a distinctive red brick, spired clock tower at the crossroads in the centre of the town that was built in 1842. The tree lined Aylesbury Street includes the 16th-century timber framed Chiltern House and 18th-century Red House.

The town was a Parliamentary Borough continuously from 1708 until the seat was abolished by the Reform Act 1832. It has had a royal charter to hold a weekly market since 1464 meaning that officially it is a town rather than a village, although today many residents of Wendover like to refer to it as the latter. It is part of a civil parish, and the parish uses the term "Parish Council" rather than "Town Council", as it would be entitled to.

Part of the town was once the property of Anne Boleyn whose father held the manor of Aylesbury among his many estates. There is still a row of houses in the town today, known as Anne Boleyn's Cottages. The town is the birthplace of Gordon Onslow Ford, British surrealist artist, and it is believed to be the birthplace of the medieval chronicler Roger of Wendover. The town is also the birthplace of Cecilia Payne, the astronomer who first showed that the Sun is mainly composed of hydrogen.

The Aylesbury constituency of which Wendover forms a part has elected a Conservative MP (currently David Lidington) since 1924. Local elections, as in May 2011, often feature only Conservative, Liberal Democrat and independent candidates. The Wendover Parish Council, reelected in May 2015, has a small office in the town and operates a block grant from Aylesbury Vale District Council.

Wendover is located in the Chiltern Hills, Buckinghamshire, to the south-east of Aylesbury.

Today the town is very popular with commuters working in London. The popularity is due partly to the town's easy access to London by rail, partly to Wendover railway station, served by Chiltern Railways from London Marylebone via Amersham on the London to Aylesbury Line, and partly because it is so picturesque. Property values have risen dramatically in recent years since the completion of the Wendover Bypass, which removed a lot of traffic from the town's narrow streets. There is a weekly open market held every Thursday. Wendover has two bus routes passing through it; the 50 travels between Aylesbury and RAF Halton and the 55 travels between Aylesbury and Chesham. Both services are run by Arriva.

Wendover was well known for having a varied and diverse range of pubs, many of which have now closed due to the constraints and geographics of the day. The pubs that still exist today are The Red Lion, The George & Dragon, The White Swan, The King and Queen, The Pack Horse, The Marquis of Granby, which was renamed in 2010 and is now called The Village Gate and The Shoulder of Mutton. The Red Lion pub was home to 'Britain's Oldest Barmaid', 100-year-old Dolly Saville, who worked at the pub for 76 years. It is claimed by media sources that she may even have been the oldest barmaid in the world, although this would be difficult to prove.

A branch of Costa opened on the Aylesbury Road in early 2013, on the site of the former Barclays Bank, much to the objection of some local residents.

Wendover also plays host to the 'Coombe Hill Run' which usually occurs on the 1st Sunday of June every year. It begins and ends in the village and encompasses two very steep climbs up the Hill to the monument along with a very steep decline. Legend states that a boy from Wendover can only become a man once he has completed the course for the first time.

The many hamlets in Wendover civil parish include:

By virtue of its excellent location, sitting in a gap in the Chiltern Hills and a designated Area of Outstanding Natural Beauty, Wendover has much to offer both local people and visitors wishing to explore the local countryside. The area is very popular with walkers, cyclists and horse riders. The frequent train service from London Marylebone makes it an ideal destination for a day trip to the country. The Ridgeway National Trail, an 85-mile route that extends from Avebury to Ivinghoe, passes along Wendover High Street. Apart from the Ridgeway Trail there are 33 miles of public rights of way and bridleways criss-crossing the parish. These paths will take you over the open chalk downland of Coombe Hill, Buckinghamshire, home to Britains longest surviving geocache, with its elegant monument to the Buckinghamshire men who died in the Boer War, or walk to the pretty hamlet of Dunsmore in the spring and enjoy the carpet of bluebells, or enjoy the shaded woods on Haddington Hill and Boddington Hill, belonging to Forest Enterprise (known locally as 'Wendover Woods'). Here the visitor can enjoy specially prepared cycle routes, all ability walks, barbecue sites as well as play areas for children. Close to Boddington hill there are the remains of an Iron Age hill fort.

A further attraction is the walk along the Wendover Arm of the Grand Union Canal, extending for approximately five miles from the centre of Wendover, to Tring. This section of the canal is currently the subject of a long term restoration project and has become home to many varieties of wildlife, including a colony of mandarin ducks. 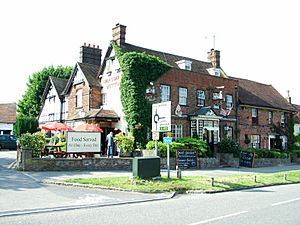 The Shoulder of Mutton public house

Facilities in the village centre include a post office, several hairdressers, a community library (run by volunteers), multiple delis and cafés, a pharmacy and a charity shop. There is a weekly open market on Thursdays.

Wendover was well known for its diverse range of pubs, but many of these have now closed. The pubs still open today are The Red Lion, The George & Dragon, The White Swan, The King and Queen, The Pack Horse, and The Shoulder of Mutton. The Red Lion pub was home to 'Britain's Oldest Barmaid', 100-year-old Dolly Saville, who worked at the pub for 76 years.

Wendover Football Club currently shares the school fields of the John Colet School and a clubhouse is open each Saturday afternoon for either a first or a reserve team fixture.

Wendover hosts the 'Coombe Hill Run', usually held on the first Sunday in June. It begins and ends in the village and includes two very steep climbs up the hill to the monument along with a very steep decline.

Wendover Cricket Club played at Ellesborough Road Ground, however, this site lay in the path of High Speed 2. The club will move to a new premises, funded by HS2 Ltd, soon in the future.

There are four schools in the town:

The town has easy access to London by rail, with Wendover station hosting Chiltern Railways services to and from London Marylebone on the London to Aylesbury Line.

All content from Kiddle encyclopedia articles (including the article images and facts) can be freely used under Attribution-ShareAlike license, unless stated otherwise. Cite this article:
Wendover Facts for Kids. Kiddle Encyclopedia.