Kids Encyclopedia Facts
(Redirected from Venus (planet))
This page is about the planet. For other uses, see Venus (disambiguation).

It is a terrestrial planet because it has a solid, rocky surface like other planets in the inner solar system. Astronomers have known Venus for thousands of years. The ancient Romans named it after their goddess Venus. Venus is the brightest thing in the night sky except for the Moon. It is sometimes called the morning star or the evening star as at some elongations it is easily seen just before the sun comes up in the morning and, at other times, just after the sun goes down in the evening. Venus comes closer to the Earth than any other planet does. A Venusian day takes about 243 Earth days.

Venus is sometimes called the sister planet of Earth as they are quite similar in size and gravity. In other ways the planets are very different. Venus' atmosphere (air) is mostly carbon dioxide with clouds of sulphuric acid. Sulphuric acid is a chemical that is very poisonous to humans.

The thick atmosphere has made it hard to see the surface, and until the twenty-first century many people thought things might live there. The pressure on Venus' surface is 92 times that of Earth. Venus has no moons. Venus spins very slowly on its axis and it spins in the opposite direction to the other planets. 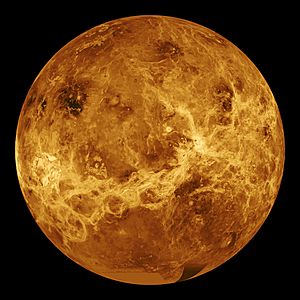 Radar view of the surface of Venus (Magellan spacecraft)

Venus is a terrestrial planet so, like the Earth, its surface is made of rock. Venus is much hotter than Earth. All the carbon dioxide in the atmosphere acts like a blanket, trapping heat from the Sun. This effect is called the greenhouse effect and it is very strong on Venus. This makes the surface of Venus the hottest of any planet's surface in the Solar System with an estimated average temperature of 480 °C (896.0 °F). This is hot enough to melt lead or zinc.

Venus has no oceans because it is much too hot for water. Venus' surface is a dry desert. Because of the clouds, only radar can map the surface. It is about 80% smooth, rocky plains, made mostly of basalt. Two higher areas called continents make up the north and south of the planet. The north is called Ishtar Terra and the south is called Aphrodite Terra. They are named after the Babylonian and Greek goddesses of love.

It is impossible to see the planet's surface from space as the thick cloud layer reflects 60% of the light that hits it. The only way scientists are able to see it is by using infrared and ultraviolet cameras and radar.

Scientists believe that billions of years ago, the atmosphere of Venus could have been like Earth's atmosphere. There may have been lots of water on the surface of Venus. But after 600 million to several billion years, a greenhouse effect was caused by the evaporation of the water, which made lots of greenhouse gases in its atmosphere.

In 1967, Venera 4 found that the magnetic field of Venus was much weaker than that of Earth. This magnetic field is induced by an interaction between the ionosphere and the solar wind. Venus' magnetosphere is not strong enough to protect the atmosphere from cosmic rays.

Venus can sometimes be seen passing between the Sun and Earth. Venus looks like a black dot when seen through a special telescope. These passages are called "transits". These "transits" happen in pairs eight years apart. Then it is more than a hundred years to the next pair.

Orbit of Venus compared to the orbit of the Earth

Venus orbits the Sun at an average distance of about 108 million km (67 million mi). It completes an orbit every 224.7 days. The rotation of Venus is slow. A Venusian day is longer than a Venusian year. 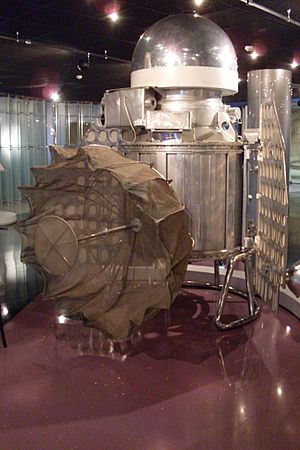 The first robotic space probe mission to Venus, and the first to any planet, began with the Soviet Venera program in 1961. The United States' exploration of Venus had its first success with the Mariner 2 mission on 14 December 1962, becoming the world's first successful interplanetary mission, passing 34,833 km (21,644 mi) above the surface of Venus, and gathering data on the planet's atmosphere.

On 18 October 1967, the Soviet Venera 4 successfully entered the atmosphere and deployed science experiments. Venera 4 showed the surface temperature was hotter than Mariner 2 had calculated, at almost 500 °C (932 °F), determined that the atmosphere is 95% carbon dioxide (CO2), and discovered that Venus's atmosphere was considerably denser than Venera 4's designers had anticipated. The joint Venera 4–Mariner 5 data were analysed by a combined Soviet–American science team over the following year, in an early example of space cooperation. 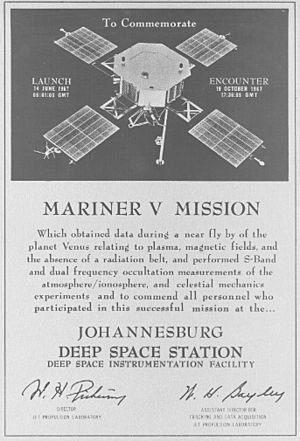 Venera 7, the first space probe to land on Venus, was destroyed by the hostile conditions on Venus after only 23 minutes. In 1974, Mariner 10 swung by Venus on its way to Mercury and took ultraviolet photographs of the clouds, revealing the extraordinarily high wind speeds in the Venusian atmosphere.

NASA obtained additional data in 1978 with the Pioneer Venus project that consisted of two separate missions: Pioneer Venus Orbiter and Pioneer Venus Multiprobe. The successful Soviet Venera program came to a close in October 1983, when Venera 15 and 16 were placed in orbit to conduct detailed mapping of 25% of Venus's terrain.

As of 2016, Japan's Akatsuki is in a highly elliptical orbit around Venus since 7 December 2015, and there are several probing proposals under study by Roscosmos, NASA, and India's ISRO.

In 2016, the NASA Innovative Advanced Concepts program studied a rover, the Automaton Rover for Extreme Environments, designed to survive for an extended time in Venus' environmental conditions. It would be controlled by a mechanical computer and driven by wind power.

All content from Kiddle encyclopedia articles (including the article images and facts) can be freely used under Attribution-ShareAlike license, unless stated otherwise. Cite this article:
Venus Facts for Kids. Kiddle Encyclopedia.