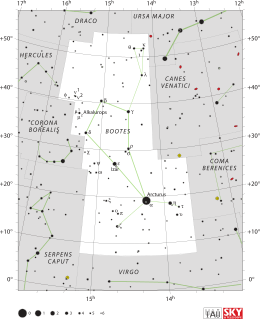 Boötes, pronounced with both 'O's as 'boötez', is one of the 88 modern constellations in the northern sky. The name is from the Greek word Βοώτης, which means herdsman – someone who takes care of animals.

The constellation's shape is like a kite. Boötes has the third brightest star in the night sky, called Arcturus (α Bootis). The astronomer Ptolemy listed it in the 2nd century when he made a list of 48 constellations.

The Cloverleaf quasar is visually in Bootes.

All content from Kiddle encyclopedia articles (including the article images and facts) can be freely used under Attribution-ShareAlike license, unless stated otherwise. Cite this article:
Boötes Facts for Kids. Kiddle Encyclopedia.