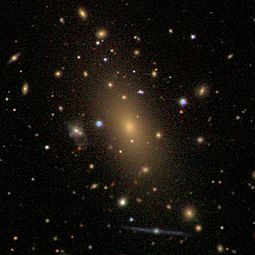 IC 1101, the largest known galaxy located in the centre of Abell 2029, a galaxy cluster approximately 1 Billion light years away in the constellation of Virgo.

IC 1101 is the largest known galaxy. It is a supergiant elliptical galaxy at the center of the Abell 2029 galaxy cluster. It, along with its cluster is 1.07 billion light years away in the constellation of Virgo.

The galaxy has a diameter of about 4 or 6 million light years, which makes it the largest known galaxy in terms of breadth and size. It is the central galaxy of a huge galaxy cluster called Abell 2029 which has a mass (mostly dark matter) of roughly 100 trillion stars. IC 1101 Is also known as A2029-BCG, as it is the brightest member of the aforementioned cluster Abell 2029 . IC 1101 is more than 50 times the size of the Milky Way and 100 times as massive. If it were in place of our galaxy, it would swallow up the Milky Way, Large Magellanic Cloud, Small Magellanic Cloud, Andromeda Galaxy, and the Triangulum Galaxy, and even most of the Local Group. IC 1101 owes its size to many collisions of much smaller galaxies about the size of the Milky Way and Andromeda galaxies. It has steadily grown to this size due to these collisions. It also has the largest core of any galaxy, at a core diameter of around 13,000 LY, bigger than the previous largest core of any galaxy which is at 10,000 LY, in the elliptical galaxy A2261-BCG [1].

All content from Kiddle encyclopedia articles (including the article images and facts) can be freely used under Attribution-ShareAlike license, unless stated otherwise. Cite this article:
IC 1101 Facts for Kids. Kiddle Encyclopedia.