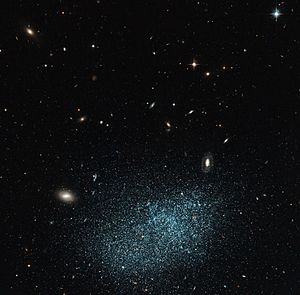 UGC 9128 is a dwarf irregular galaxy, it probably contains only around one hundred million stars.

Most galaxies, including dwarf galaxies, form in association with dark matter or out of gas containing metals. However, NASA's Galaxy Evolution Explorer space probe identified new dwarf galaxies forming out of gases lacking metals. These galaxies were in the Leo Ring, a cloud of hydrogen and helium around two massive galaxies in the constellation Leo.

Dwarf galaxies can be pulled toward and ripped by neighbouring spiral galaxies till they ultimately merge. 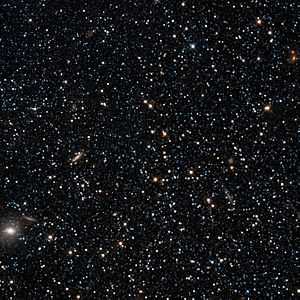 Phoenix dwarf galaxy is a dwarf irregular galaxy, with younger stars in its inner regions and older ones at its outskirts.

There are many dwarf galaxies in the Local Group: these small galaxies frequently orbit around larger galaxies, such as the Milky Way, the Andromeda Galaxy and the Triangulum Galaxy. A 2007 paper has suggested that many dwarf galaxies were created by tidal forces during the early evolution of the Milky Way and Andromeda. Tidal dwarf galaxies are produced when galaxies collide and their gravitational masses interact. Streams of galactic material are pulled out away from the parent galaxies and the halos of dark matter that surround them.

The Milky Way has more than 20 known dwarf galaxies orbiting it. Recent observations suggest the largest globular cluster in the Milky Way, Omega Centauri, is actually the core of a dwarf galaxy with a black hole in its center. It was at some time absorbed by the Milky Way.

All content from Kiddle encyclopedia articles (including the article images and facts) can be freely used under Attribution-ShareAlike license, unless stated otherwise. Cite this article:
Dwarf galaxy Facts for Kids. Kiddle Encyclopedia.