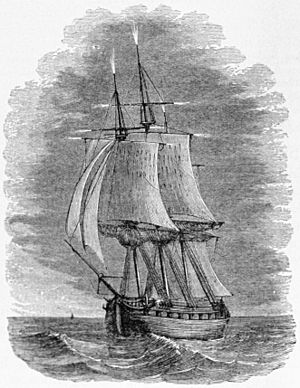 St. Elmo's fire on a ship at sea

St. Elmo's fire (also called St. Elmo's light) is a weather event in which bright, glowing, ball of light is seen near pointed objects, like the mast of a ship. It is plasma made by a coronal discharge from a sharp or pointed object in a strong electric field in the air. These fields could be created by thunderstorms or a volcanic eruption.

St. Elmo's fire is named after St. Erasmus of Formia. Elmo (and Erasmo) is the Italian name for St. Erasmus, the patron saint of sailors. The fire sometimes was seen on ships at sea during thunderstorms. Sailors believed the glowing ball of light may have been a religous event, and named it after St. Elmo. Electricity in the air can change compass readings, so some sailors may have seen the fire as a sign of bad luck and stormy weather. Other references claim that sailors may have thought of St. Elmo's fire as a good sign, showing that their patron saint was with them.

All content from Kiddle encyclopedia articles (including the article images and facts) can be freely used under Attribution-ShareAlike license, unless stated otherwise. Cite this article:
St. Elmo's fire Facts for Kids. Kiddle Encyclopedia.