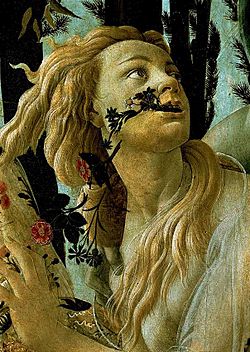 Chloris ("Khloris" or Χλωρίς, from "Khloros" or χλωρός, meaning "greenish-yellow," "pale green," "pale," or "fresh") refers to several figures in Greek mythology. Some stories refer to different characters. Others refer to the same Chloris, but have different details.

Chloris was a Nymph. She represented spring, flowers and new growth. Her Roman equivalent was the goddess Flora. She was kidnapped by and later married Zephyr.

Meliboea was one of Niobe and Amphion's fourteen children, and the only one not killed when Artemis and Apollo killed the children as revenge. Meliboea was so scared by this that she turned permanently pale. She changed her name to Chloris ("pale one").

She later married Neleus and became queen in Pylos.

Chloris married the seer Ampyx (son of Elatus). She had a child called Mopsus, who also became a famous seer and later joined the Argonauts.

All content from Kiddle encyclopedia articles (including the article images and facts) can be freely used under Attribution-ShareAlike license, unless stated otherwise. Cite this article:
Chloris Facts for Kids. Kiddle Encyclopedia.