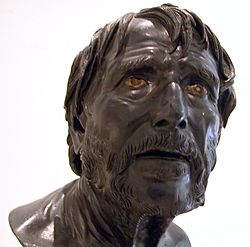 Ancient bronze bust, known as Pseudo-Seneca. This is now believed to be an imaginative portrait of Hesiod.

The Theogony (Greek: Θεογονία, Theogonía, the birth of the gods) is a poem by Hesiod. It was written in the 8th or 7th century BC, and uses the same dialect of Ancient Greek as Homer. This dialect is known as Epic dialect today. With the exception of the Illiad and the Odyssey, the Theogony is the oldest known source of Greek mythology.

The poem is a synthesis of different Greek stories and traditions. It is a story that tells how the gods came to be and how they established permanent control over the cosmos. It is the first Greek mythical cosmogony. In the beginning, the state of the universe is chaos - a dark indefinite void. Everything else appeared from divine chaos.

All content from Kiddle encyclopedia articles (including the article images and facts) can be freely used under Attribution-ShareAlike license, unless stated otherwise. Cite this article:
Theogony Facts for Kids. Kiddle Encyclopedia.