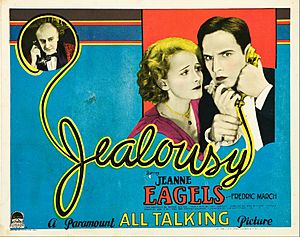 Jealousy is an emotion; the term generally refers to the thoughts or feelings of insecurity, fear, concern, and envy over lack of possessions, status or something of great personal value.

Jealousy can consist of one or more emotions such as anger, resentment, inadequacy, helplessness or disgust. In its original meaning, jealousy is distinct from envy, though the two terms have popularly become similiar in the English language, with jealousy now also taking on the definition originally used for envy alone.

Jealousy is a typical experience in human relationships, and it has been observed in infants as young as five months. Some claim that jealousy is seen in every culture; however, others claim jealousy is a culture-specific phenomenon. Jealousy can either be suspicious or reactive, and it is often a series of particularly strong emotions and a universal human experience.

Throughout history, artists have also explored the theme of jealousy in photographs, paintings, films, songs, plays, poems, and books, and theologians have offered religious views of jealousy based on the scriptures of their faiths. 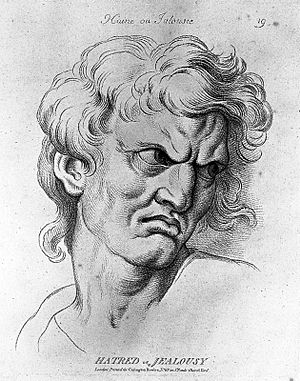 The common experience of jealousy for many people may involve:

The experience of envy involves:

All content from Kiddle encyclopedia articles (including the article images and facts) can be freely used under Attribution-ShareAlike license, unless stated otherwise. Cite this article:
Jealousy Facts for Kids. Kiddle Encyclopedia.