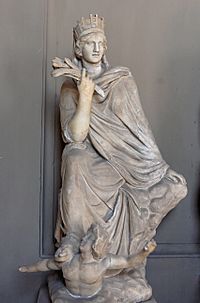 A statue of Tyche at the Vatican.

Tyche, also known as Tuch, was the goddess of destiny in Greek mythology. She controlled the good and bad of fortune and prosperity of a city. Her name means "luck" in Greek. She is often represented wearing a mural crown. The crown looks like the walls of a city. She is often carrying a large horn with all her wealth and richness in it that she sometimes spreads to others. She is a daughter of Oceanus and Tethys, according to Greek poet Hesiod.

Tyche is one of the Oceanids. Oceanids are the daughters of the Titans Tethys and Okeanos. The story of the Oceanids is told in the Theogony by Greek poet Hesiod. Tyche and her sister Eudora stand for a joining of bounty and luck.

All content from Kiddle encyclopedia articles (including the article images and facts) can be freely used under Attribution-ShareAlike license, unless stated otherwise. Cite this article:
Tyche Facts for Kids. Kiddle Encyclopedia.