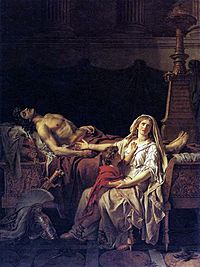 Andromache with her son and the dead Hector

Andromache is a person in Greek mythology. She is the wife of Hector of Troy and mother of Astyanax.

After the Trojan War, Neoptolemus took her and Helenus as slaves. Of Neoptolemus she had a child named Molossus. After Neoptolemus died, Andromache married Helenus, and became Queen of Epirus.

All content from Kiddle encyclopedia articles (including the article images and facts) can be freely used under Attribution-ShareAlike license, unless stated otherwise. Cite this article:
Andromache Facts for Kids. Kiddle Encyclopedia.