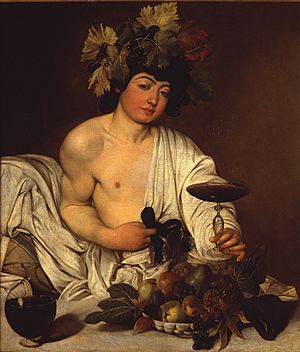 Bacchus was the Roman god of agriculture and wine, copied from the Greek god Dionysus. He was the last god to join the twelve Olympians; Hestia gave up her seat for him. His plants were vines and twirling ivy. He often carried a pinecone-topped staff, and his followers were goat-footed Satyrs and Maenads, wild women who danced energetically during his festivals.

Bacchus was the child of Jupiter (whose Greek name is Zeus) and Semele, a human whom Juno (whose Greek name is Hera) had tricked into asking to see Jupiter as he really was. Since she was a mortal, she was burned up by the sight of Jupiter in his divine form. So Jupiter sewed the infant Bacchus into his thigh, and gave birth to him nine months later. As a child, Bacchus was tutored by Silenus, who was a great lover of wine and often had to be carried on the back of a donkey. Before he took his place at Olympus, Bacchus wandered the world for many years, going as far as India to teach people how to grow vines.

All content from Kiddle encyclopedia articles (including the article images and facts) can be freely used under Attribution-ShareAlike license, unless stated otherwise. Cite this article:
Bacchus Facts for Kids. Kiddle Encyclopedia.