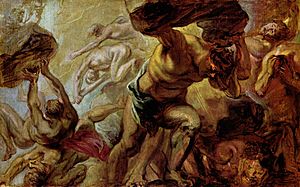 Titans collapse under the boulders thrown by the Hekatonkheires ('The Fall of the Titans by Peter Paul Rubens, 1637–1638)

The Hekatonkheires (Greek:  Ἑκατόγχειρες - "Hundred-handed ones") are one of the three races of beings born to Ouranos and Gaia, the primordial gods of the sky and the Earth. Their names are Kottos (Greek: Κόττος), Briareos (Greek: Βριάρεως) and Gyges (Greek: Γύγης).

All content from Kiddle encyclopedia articles (including the article images and facts) can be freely used under Attribution-ShareAlike license, unless stated otherwise. Cite this article:
Hekatonkheires Facts for Kids. Kiddle Encyclopedia.