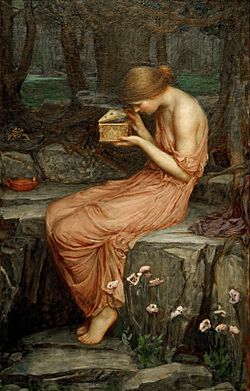 Psyche (pronounce: SY-kee) is a former mortal woman and goddess of the soul in Greek mythology. She is the wife of Eros (Cupid) and the mother of Hedone. She is always pictured with butterfly wings. Today, Psyche is known from a story called The Golden Ass, written by Lucius Apuleius in the 2nd century.

All content from Kiddle encyclopedia articles (including the article images and facts) can be freely used under Attribution-ShareAlike license, unless stated otherwise. Cite this article:
Psyche (mythology) Facts for Kids. Kiddle Encyclopedia.