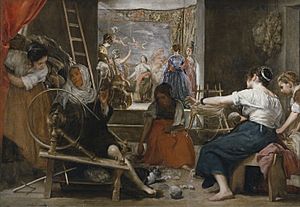 The fable of Arachne, by Diego Velázquez

Arachne is a character from Greek mythology.

She was the daughter of Idmon of Colophon, in Lydia (Greece). Her father earned his living with dyeing (coloring) cloth. She learned to be a weaver. A weaver makes cloth, or textiles, from single strands. She was good at what she did, and she claimed that her skill was greater than that of Athena. Athena was the young Greek goddess of weaving (amongst other things).

Athena appeared to the girl as an old woman, and warned her not to offend the gods. Arachne did not take the advice, she wanted a weaving contest to prove her skill.

Athena revealed herself, and let the contest begin. Athena wove her scene were she won over Poseidon, the god of the sea. Arachne wove scenes about Zeus being unfaithful, with different women: Leda, Europa, and Danae.

Athena saw Arachne's work was without error, but she did not like the subject of Arachne's weaving. Athena lost her temper, and destroyed what Arachne had created. She also hit Arachne on the head. Arachne then realized what she had done. She ran away and killed herself. Athena however had pity with Arachne, so before Arachne was dead, she changed the rope into a cobweb, and Arachne into a spider.

Ovid tells the story in Metamorphoses. Book 6, 5-54, 129-145. The story is typical of tragedy in Ancient Greek theatre, where pride in thinking oneself better than the gods – ὕβρις (hubris) – brings punishment from the gods.

The Greek word for spider is arachne (αραχνη), from which derive the mythological woman's name, the class name Arachnida in biology, and the name for fear of spiders, arachnophobia.

All content from Kiddle encyclopedia articles (including the article images and facts) can be freely used under Attribution-ShareAlike license, unless stated otherwise. Cite this article:
Arachne Facts for Kids. Kiddle Encyclopedia.