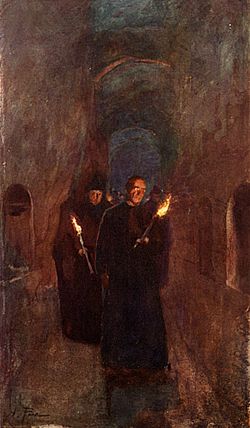 A procession in the San Callistus catacombs in Rome.

A catacomb is an underground tunnel that is used to hold and bury dead bodies. Many of them were made in the Roman Empire. 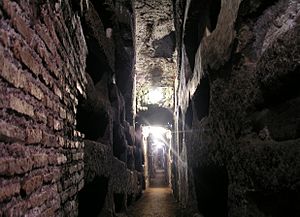 Grave niches in the Catacombs of Domitilla, Rome.

Jesus and his twelve apostles, fresco with the Chi-Rho symbol ☧, Catacombs of Domitilla, Rome.

The Chi-Rho symbol ☧ with Alpha and Omega, Catacombs of Domitilla, Rome.

Catacombs around the world include:

There are also catacomb-like burial chambers in Anatolia, Turkey; in Sousse, North Africa; in Syracuse, Italy; Trier, Germany; Kiev, Ukraine. Capuchin catacombs of Palermo, Sicily were used as late as the 1920s. Catacombs were available in some of the grander English cemeteries founded in the 19th Century, such as Sheffield General Cemetery (above ground) and West Norwood Cemetery (below ground). There are catacombs in Bulgaria near Aladzha Monastery and in Romania as medieval underground galleries in Bucharest. In Ukraine and Russia, catacomb (used in the local languages' plural katakomby) also refers to the network of abandoned caves and tunnels earlier used to mine stone, especially limestone.

The Catacombs is the eighth movement from Pictures at an Exhibition by Modest Mussorgsky. It describes of loud and soft sounds of echoes in catacombs.

All content from Kiddle encyclopedia articles (including the article images and facts) can be freely used under Attribution-ShareAlike license, unless stated otherwise. Cite this article:
Catacomb Facts for Kids. Kiddle Encyclopedia.