Dugandan is both a town and a locality in the Scenic Rim Region, Queensland, Australia. In the 2011 census, Dugandan had a population of 395 people. 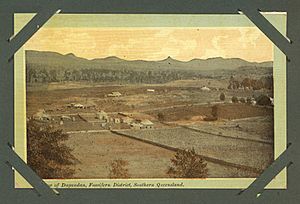 The name Dugandan is believed to be an Aboriginal word dugai/tugai meaning mountain spur place. Originally the name was used for a large pastoral run established in 1884, covering a much larger area than the current locality from Boonah to Mount Joyce. As a result, the name Dugandan was used for the present day town of Boonah until the 1880s when it acquired its present name.

By 1887 a sawmill was already established in Dugandan under the combined partnership of Josias Hancock and James Cossart. Cossart's Mill became one of the major employers in the region and contributed significantly to the prosperity of Boonah and Dugandan into the twentieth century. 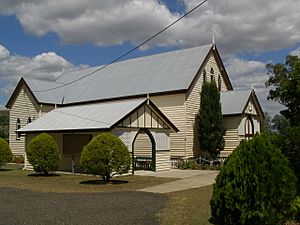 Dugandan has the following heritage sites:

All content from Kiddle encyclopedia articles (including the article images and facts) can be freely used under Attribution-ShareAlike license, unless stated otherwise. Cite this article:
Dugandan, Queensland Facts for Kids. Kiddle Encyclopedia.