Barney View is a rural locality in the Scenic Rim Region, Queensland, Australia. Mount Maroon rises to 966 m above sea level in the west of Barney View. This western section is protected within Mount Barney National Park. The upper Logan River passes through the west of the locality and marks a portion of the western border. In the south the terrain rises to more than 500 m along the northern slopes of Mount Giles. The privately operated Flanagan Reserve Bush Camping allows visitors to camp at a 12 ha site along the river. 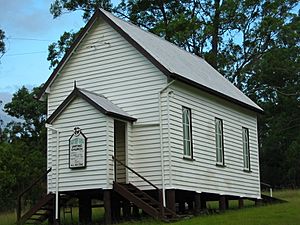 A Methodist church was opened in 1908.

Barney View was originally known as Thulimbah, which was frequently confused with another Queensland district of the same name, Thulimbah near Stanthorpe. The problem was resolved in 1916 by changing the name to Barney View (due to its location beside Mount Barney).

Heritage-listed sites at Barney View include:

All content from Kiddle encyclopedia articles (including the article images and facts) can be freely used under Attribution-ShareAlike license, unless stated otherwise. Cite this article:
Barney View, Queensland Facts for Kids. Kiddle Encyclopedia.