The south and east of the area, including Mount May is protected within the Mount Barney National Park.

A cemetery at Maroon has graves dating back to 1856. 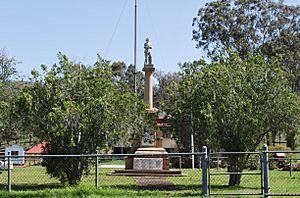 Maroon has a number of heritage-listed sites, including:

The Maroon War Memorial commemorates those of the district who enlisted in World War I; it was dedicated on 21 May 1920 by General Sir William Birdwood.

All content from Kiddle encyclopedia articles (including the article images and facts) can be freely used under Attribution-ShareAlike license, unless stated otherwise. Cite this article:
Maroon, Queensland Facts for Kids. Kiddle Encyclopedia.