Tabragalba is a locality in the Scenic Rim Region of South East Queensland, Australia.

The eastern border of Tabragalba follows a ridge line and includes Mount Tabragalba. Part of the western boundary is marked by the Albert River. The Beaudesert Nerang Road traverses the northern end. Agriculture is the predominate land use.

The name originates from an Aboriginal expression that was given to local pastoral station established in 1843. The name was also used for an early local government area known as Tabragalba Division which became the Shire of Tabragalba, then Beaudesert Shire. In 2008, the shire was merged into the new Scenic Rim Region.

Tabragalba has a number of heritage-listed sites, including: 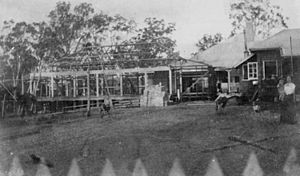 Heritage listed Wyambyn homestead was designed by Robin Dods and built in 1909 at Tabragalba. The design features the Arts and Crafts architectural style. Cattle were originally raised on the property until the 1920s when sheep became more profitable. The homestead was used as a setting in the movie Unfinished Sky in 2007.

All content from Kiddle encyclopedia articles (including the article images and facts) can be freely used under Attribution-ShareAlike license, unless stated otherwise. Cite this article:
Tabragalba, Queensland Facts for Kids. Kiddle Encyclopedia.