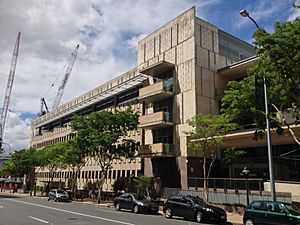 Bonner was born at Ukerebagh Island, in the Tweed River in northern New South Wales. He never knew his father and had very little education. He worked on a farm, and in 1946 moved to Palm Island, near Townsville, Queensland. He became Assistant Settlement Overseer.

In 1960 he moved to Ipswich, and joined the board of directors of the One People of Australia League (OPAL). This was an indigenous rights organisation. He became its Queensland president in 1970. He joined the Liberal Party in 1967 and held local office in the party. Following the resignation of Liberal Senator Dame Annabelle Rankin in 1971, Bonner was chosen to replace her. He became the first indigenous Australian to sit in the Australian Parliament. He was elected in his own right in 1972, 1974, 1975 and 1980.

While in the Senate he served on a number of committees. He was never a serious candidate for promotion to the ministry. He rebelled against the Liberal Party policy on some issues. Partly as a result of this, and partly due to pressure from younger candidates, he was dropped from the Liberal Senate ticket at the 1983 election. He stood as an independent and was nearly successful. The Hawke government made him a director of the Australian Broadcasting Corporation.

In 1979 Bonner was jointly named Australian of the Year along with naturalist Harry Butler. In 1984 Bonner was made an Officer of the Order of Australia. From 1992 to 1996 he was member of the Griffith University Council. The university gave him an honorary doctorate in 1993. In 1998 he was elected to the Constitutional Convention as a candidate of Australians for a Constitutional Monarchy.

The Neville Bonner Memorial Scholarship was set up by the Australian government in 2000. It gives money so that Indigenous Australians can study politics or related subjects at Australian universities.

The Queensland federal electorate of Bonner is named in his honour. A rugby league oval in Ipswich was named the Neville Bonner Sporting Complex in his honour. This oval was the home of an indigenous team, but is now the official home of the Queensland Cup team, the Ipswich Jets. The suburb of Bonner in Canberra, Australia's national capital, also bears his name. The head office of the Queensland Department of Communities, Child Safety and Disability Services is named the "Neville Bonner Building".

Bonner was an active boomerang thrower. One of his boomerangs can be seen at the Old Parliament House in Canberra.

All content from Kiddle encyclopedia articles (including the article images and facts) can be freely used under Attribution-ShareAlike license, unless stated otherwise. Cite this article:
Neville Bonner Facts for Kids. Kiddle Encyclopedia.