Bundaberg is a city in Queensland, Australia. It is part of the local government area of the Bundaberg Region and is a major centre within Queensland's broader Wide Bay-Burnett geographical region. The city is on the Burnett River, approximately 385 kilometres (239 mi) north of the state capital, Brisbane, and 15 kilometres (9.3 mi) inland from the coast. The local Aboriginal group is the Kalki people.

The first Europeans in the area were timbergetters and co-founders of Bundaberg, John and Gavin Steuart who arrived in 1867. The town was surveyed in 1870. By 1881 it was gazetted as a municipality (the Borough of Bundaberg). It grew rapidly into a town by 1902 and a city by 1913. At June 2015 the city had an estimated urban population of 70,588.

The city name is thought to be a combination of bunda, Aboriginal word denoting an important man, and the suffix -berg (town) from the Old English beorg (hill) from the Proto-Germanic *burgs (hill fort) which is also the source of the words -bury, borough, barrow. The city is colloquially known as "Bundy".

Bourbong Street is the main street of the city and there is some controversy in regards to its spelling; Bourbong was alternatively spelled Boorbong, which is a Bunda Aboriginal word for a 'large waterhole' possibly near the Rubyanna area. The main street was historically also gazetted in the Bundaberg Mail as "Bourbon" street. Rackemann conducted a survey of letterheads printed between 1904 and 1957. Up until 1940 the count for both names was near enough to equal, with in some cases companies carrying both spelling variations in successive years. However, by 1941 there is no reference to "Bourbon" street. Farmer Robert Strathdee's farming selection in the vicinity of the watering holes was recorded on early survey maps as 'Boorbung'. The Bourbong was referred to by Howitt as the name of one of the Bunda initiation ceremonies.

Another possibility is that "Bourbong" refers to "Bairbong", bair (chief) and bong meaning 'dead'. This could refer to a "place at a waterhole where a chief was speared through the eye". Historically the Kalki people referred to Bundaberg as 'Bairbara' or 'place of Chiefs'; the region was referred to as 'Borral Borral'. 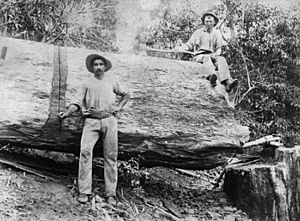 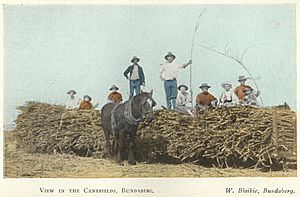 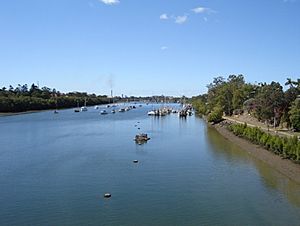 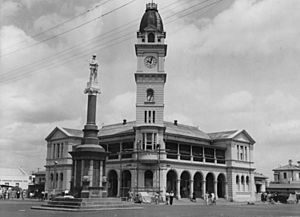 Bundaberg War Memorial in front of the Bundaberg Post Office, 1948

The Bunda moiety names were Balgoin, Barang, Bunda, Derwain and Tandor (Durrumboi in Ridley 1866); the phratry names were Kupaiathin and Dilbai. Wakka inland or wa'pa (slow speech) used the moiety name Banjurr instead of Balgoin stead (Mathew 1910). However, it has been claimed that Bunda was not a clan sub-tribe or tribe only one of the moiety names.

The first non-indigenous man to visit the region was James Davis in 1830, an escaped convict from the Moreton Bay Penal settlement. Davis was referred to as Durrumboi by the local Kabi people. He married in this area. (Rev Dunmore Lang 1861, William Ridley 1866). Alfred Dale Edwards, another early settler, was adopted into the Kalkie-speaking clan Yongkonu (Thyeebalang Roth 1910, Archibald Meston 1892). He was given the moiety name 'Bunda'. The Burnett River was identified by John Charles Burnett, after whom it was named during his exploration mission of the Wide-bay and Burnett regions in 1847.

Bundaberg was founded in 1867 as a European township by timbergetters and farmers John and Gavin Steuart. The settlement of Bundaberg originally began on the northern banks of the Burnett River in 1867 but an official survey was undertaken in 1869 and the town was re-sited onto the higher, southern banks. The first land sale held in Bundaberg occurred on 22 August 1872, although two previous sales of Bundaberg land had taken place in Maryborough. The area developed as an agricultural and port town. Initially a number of the early settlers exploited the timber on their selections but as a result of the incentives of the Sugar and Coffee Regulations 1864, sugar became a major component in Bundaberg's development from the 1870s.The first farmers in the area, including Thomas Watson, arrived soon after. Local resident and District Surveyor John Charlton Thompson was directed by the government to survey and plot an area on the South side of the river. The city was surveyed, laid out, and named Bundaberg in 1870.

Timber was the first established industry in Bundaberg. In 1868, Samuel Johnston erected a sawmill in Waterview, on the north bank of the Burnett River (downstream from the Steuart and Watson holdings). Waterview sawmill supplied Rockhampton as well as local needs. It became prominent enough to prompt the government to extend the railway connecting North Bundaberg with Mount Perry, eastward to the Waterview Mill. Waterview sawmill closed in 1903 after being damaged by flood. Experimental sugar cane cultivation in the district followed, and a successful industry grew. The first sugar mill was opened in 1882. The early sugar industry in Bundaberg was based on Kanakas workers, who were kept in a status close to slavery.

With the passage of the Local Authorities Act 1902, Barolin Division became the Shire of Barolin and the Borough of Bundaberg became the Town of Bundaberg on 31 March 1903. On 22 November 1913, Bundaberg was proclaimed a City.

The 1911 Queensland sugar strike occurred after the phasing out of South Sea Islander labour in 1904, with workers claiming that many plantation owners had substituted black indentured labourers (sometimes referred to as slaves) with white ones. Workers sought better accommodation, wages and conditions, including an eight-hour day and a minimum weekly wage of 30 shillings, including food. The mobilisation of unionists from Bundaberg to Mossman was a major achievement, with the 1911 strike lasting over seven weeks in Bundaberg where the town's economy was largely based on the sugar industry. The end result of the strike was a Commonwealth Royal Commission into the sugar industry in 1911-12, which had been initially requested by Harry Hall, a Bundaberg AWA organiser in 1908 with a petition signed by 1500 Bundaberg sugar workers. The Royal Commission, with ALF Secretary Albert Hinchcliffe as secretary, concluded the AWA demands had been justified. The union victory was a watershed in organised labour in Queensland and Australia.

In 1912 Bundaberg pioneering aviator, Bert Hinkler builds and successfully flies his own glider on Mon Repos beach. He also completed a noteworthy non-stop flight from London to Turin in 1920. The following year in 1921 Hinkler flies from Sydney to Bundaberg, non-stop, in a record breaking flight of 8 and a half hours, in the process beating a telegram he had sent to his mother, to warn her of his arrival.

The Bundaberg War Memorial commemorating those who died in the Anglo-Boer War and World War I was unveiled by Major-General Charles Brand on 30 July 1921. The Bundaberg digger was imported from Italy and is constructed of Italian marble. The completed memorial, at a cost of £1,650, was the third most costly to be erected in Queensland. It is a major regional memorial and one of the two most intact digger memorials that remain in their original settings of intersections.

In the 1960s the township was completely flooded by the Burnett river. In 1967 Bundaberg celebrated its centenerary by producing a coin and opening the The Bundaberg & District Historical Museum in the Bundaberg Botanical Gardens in Bundaberg North.

In December 2010, Bundaberg suffered its worst floods in 60 years, when floodwaters from the Burnett River inundated hundreds of homes.

Two years later, in January 2013, Bundaberg experienced its worst flooding in recorded history. Floodwaters from the Burnett River peaked at 9.53 meters. As of 28 January 2013, more than 2000 properties had been affected by floodwaters, which moved in excess of 70 km/h. Two defence force Blackhawk helicopters were brought in from Townsville as part of the evacuation operation, which ultimately used an additional 14 aircraft.

Bundaberg has a number of heritage-listed sites, including: 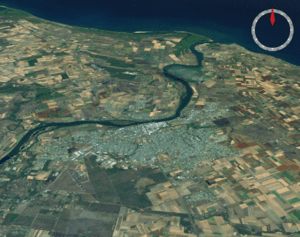 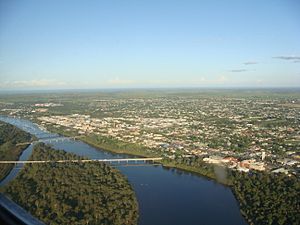 Aerial view to the east

Bundaberg has a subtropical climate with wet hot summers and mild winters. The climate is the most equable of any Australian town or city and ranked 5th on a worldwide comparison. The mean daily maximum temperature is highest in January at 30.3 °C (86.5 °F) Celsius, and the mean daily minimum is lowest in July at 9.9 °C (49.8 °F). The coldest temperature recorded in Bundaberg is −0.7 °C (30.7 °F) degrees Celsius, and some inland areas of Bundaberg sometimes experience frosts. The mean annual rainfall is 1,142.6 mm (44.98 in). 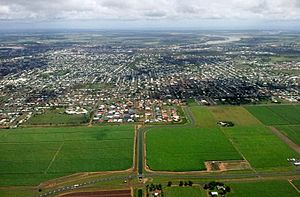 Aerial view to the north

Tourism is an important industry in Queensland, and Bundaberg is known as the 'Southern Gateway to the Great Barrier Reef'. The city lies near the southern end of the reef in proximity to Lady Elliot and Lady Musgrave Islands. The nearby town of Bargara is an increasingly popular holiday and retirement destination.

The Mon Repos turtle rookery is located on the coast just east of Bundaberg. The northern bank of the Burnett River between the Don Tallon and Burnett bridges is home to a colony of flying foxes.

Nearby beaches are popular with both locals and tourists. Moore Park Beach, to the city's north, has 20 kilometres (12 mi) of golden sandy beach. Beaches on the southern side of the Burnett River are (from north to south) the Oaks Beach, Mon Repos, Nielsen Park, Bargara Beach, Kellys Beach, Innes Park and Elliott Heads.

Tours of the Bundaberg Rum distillery and attractions at Bundaberg Botanic Gardens, such as the 2 ft narrow gauge Australian Sugar Cane Railway, are also popular with tourists. The Mystery Craters, 35 unexplained water-filled holes in the ground, discovered in 1971 at South Kolan, are also a tourist attraction.

Opened in 2002 by the former member for Hinkler Paul Neville, the Tom Quinn Community Centre gardens (a multiple "Bundy in Bloom" winner) is a site to be seen with local flora and fauna, its own cafe, marketplace, chapel, green house, training facilities, woodwork and indigenous nature section.

Opened in December 2008, the Hinkler Hall of Aviation is an historical aviation tourist attraction that celebrates pioneer solo aviator Bert Hinkler. In 1928, Hinkler was the first person to fly solo from England to Australia. The museum includes an exhibition hall, featuring multi-media exhibits, a flight simulator, a theatre, five aircraft and the historic Hinkler House.

The Bundaberg region contains a variety of museums and art galleries that showcase the region's history and culture. 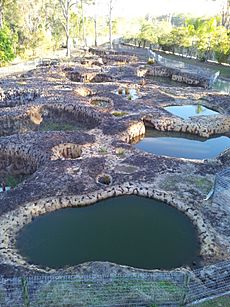 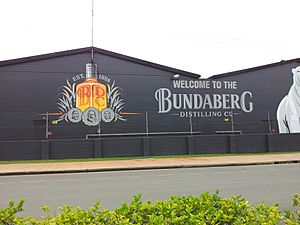 The NewsMail newspaper is published in Bundaberg from Monday to Saturday. It is available in print and online. Several community newspapers are also available including the Guardian, The Bugle & the Bundaberg Coastline

The city has been the location for three film sets: 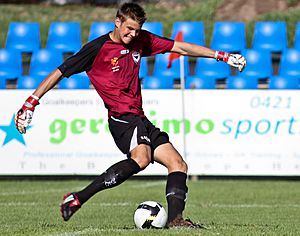 Mitchell Langerak, former Bundaberg footballer, who is now playing for Borussia Dortmund in the German Bundesliga

Rowing – Bucca Weir, west of Bundaberg, is home to the Queensland State Rowing Championships every year in December.

Soccer – Bundaberg is home to the Bundaberg Spirit soccer club. They participate in the Queensland State League against other teams across Queensland.

The other clubs in the competition are: 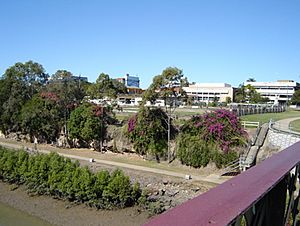 View of Bundaberg town centre from the Burnett River bridge.

Bundaberg Airport has flights to Brisbane and Lady Elliot Island. The city is home to the Jabiru Aircraft Company, which designs and manufactures a range of small civil utility aircraft.

Bundaberg's bus operator is Duffy's City Buses. As of 2013, they transport over 1000 passengers in town services, and over 2000 passengers in school services every day. Routes extend to the beach suburbs of Burnett Heads, Bargara, and Innes Park. Stewart & Sons also operates bus services in the area.

Bundaberg is serviced by several Queensland Rail passenger trains, including the Tilt Train and is approximately four and a half hours north of Brisbane by rail. The closed North Bundaberg station formerly served the Mount Perry railway line and is now a museum.

Bundaberg is situated at the end of the Isis Highway (State Route 3), approximately 50 kilometres (31 mi) east of its junction with the Bruce Highway. Many long-distance bus services also pass through the city.

Bundaberg Port is located 20 kilometres (12 mi) northeast of the city, at the mouth of the Burnett River. The port is a destination for ships from Australia and overseas. It is predominantly used for shipping raw sugar and other goods related to that industry such as Bundaberg Rum.

Bert Hinkler is memorialised in many places throughout Bundaberg 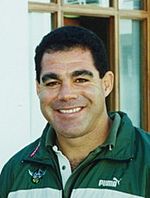 All content from Kiddle encyclopedia articles (including the article images and facts) can be freely used under Attribution-ShareAlike license, unless stated otherwise. Cite this article:
Bundaberg Facts for Kids. Kiddle Encyclopedia.