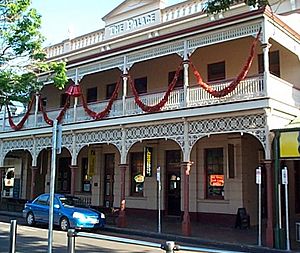 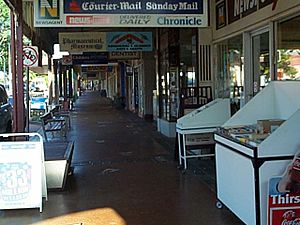 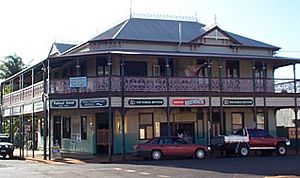 Childers is a town in the Wide Bay-Burnett region of Queensland, Australia, situated on the Bruce Highway and lies 325 kilometres (202 mi) north of the state capital Brisbane and 52 kilometres (32 mi) south-west of Bundaberg. Childers is located within Bundaberg Region local government area. At the 2011 census, Childers had a population of 1,410.

The township is set on a ridge overlooking fields of rich volcanic soil. Childers is renowned for its heritage character and is classified a National Trust town. The historic colonial buildings of the main street (Bruce Highway) are set amongst large, shady leopard trees. The sugar cane industry features prominently in Childers and has sustained the town over the years. Fruit and vegetable cropping is common on the lands around town. Tourism is a growing industry in Childers, with a number of the preserved historic buildings in town becoming tourist attractions.

Europeans first arrived in the area in the 1850s. Pastoralists established properties soon after to raise cattle on the fertile lands. Back then, sugar was (as it is now) the key crop grown in the Isis. The town was established in 1885. The Isis railway line to Childers opened in 1887 and was pivotal in the early development of the area. Childers Post Office opened on 14 November 1887. The town is reportedly named after Hugh Childers, British statesman, who was the Auditor-General of Victoria in the 1850s. The railway line closed in 1964.

Childers has seen a number of serious fires over the years. The 1902 fire destroyed much of the town centre. The town made international headlines in June 2000, when an arsonist set fire to the Palace Backpackers Hostel, claiming the lives of 15 tourists. The Palace Building reopened in 2002, and includes a memorial to those lost in the blaze, a Regional Art Gallery and an Information Centre.

Childers acts as a major economic centre in the Wide Bay-Burnett Region and is undergoing considerable growth.

Childers retains much of its historic significance, although many of the streets were redeveloped under a 'Streetscape' project that continues today. 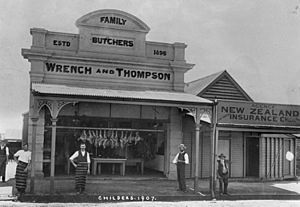 Childers has a number of heritage-listed sites, including:

The Isis Town and Country is the town's local newspaper, available once a week on Thursday. Childers is also served by a monthly community newspaper, the Childers Chit Chat, as well as its own radio station, 88.0FM Red Dirt Radio and commercial radio station Rebel 106.7.

Education in Childers consists of several primary schools, as well as the local high school, Isis District State High School. In addition, the town services the surrounding areas with its small hospital. Childers has its own courthouse. The town has several emergency service faculties including a police station, ambulance station and fire station housing Fire and Rescue Queensland Staff and Queensland Rural Fire Service volunteers. It also hosts a branch of the State Emergency Service and PCYC Emergency Services Cadets program

Childers holds a Multicultural Festival once a year on the final weekend in July. The town also hosts an agricultural show; which in the past was held in early August, but is now hosted in late May or early June.

As a celebration of its cultural heritage, Childers also hosts events in October to celebrate the Crush Festival- a region-wide event to mark the end of the sugar-cane crushing season.

All content from Kiddle encyclopedia articles (including the article images and facts) can be freely used under Attribution-ShareAlike license, unless stated otherwise. Cite this article:
Childers, Queensland Facts for Kids. Kiddle Encyclopedia.